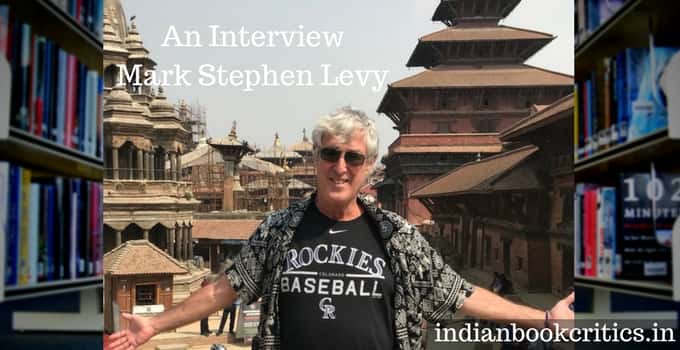 “Indian Book Critics” has put certain questions to Mark Stephen Levy, an author from the USA who has recently published his book in India, American Maharajah. He has answered the questions for us and we are publishing the same here. Hope you will enjoy this interview.

Q1. How did you come up with the title, Mark, which mixes up two emotions – the Western and the Eastern? American Maharajah is a quite interesting title and it strikes very quickly!

Mark S Levy: I wanted to make the main character, Ravi Shankar American to give a perspective of what its like to be American, or any Western foreigner visiting India for the first time. And I combined the Maharajah theme and the title made perfect sense, and it’s catchy!

Q2. So, when did you start planning your novel? Was it just after your first one, Overland? Or you planned it in leisure and detail?

Mark S Levy: The initial spark of the idea for American Maharajah happened while in India on my promotional tour of Overland in 2011. But I (lazily) sat on the idea until completing my 2016 trip to India and when I arrived home, I started to write AM.

Q3. Many of the readers who came across your writing recently, would love to hear more about Overland. Can you please let them in in brief what’s that about?

Mark S Levy: Overland is an action/adventure love story set against the Soviet invasion of Afghanistan in 1979. Graduating medical student Danny Benson proposes to his long-time girlfriend Heather Matheson on a beach in Santa Barbara so they can start their lives together, only to reject his proposal. On the day of his last exam, he receives a Dear John letter from Heather telling him she is in London and about to take off on the Magic Bus ride of her life to travel overland to Kathmandu, Nepal. Distressed to win her back, the only thing he can do is go after her. Two weeks behind, Danny Benson sets out on the adventure of his life to find the girl that left him behind. When they inexplicably meet up, their next course will be a collision with history.

Q4. The way you have written the novel American Maharajah, it only shows that you are very much in connecting with India and the Indianness. How did you plan Aishani’s character? And that of the ‘Dalit’ lady?

Mark S Levy: In any story, the beauty of the main female character draws the reader and even movie goer in. She is an amalgam of various Indian people I have met and mostly a vivid image of someone I would sure like to be with.

The Dalit woman also came from a spark of imagination and to show that in Indian society that bottom rung people also have a life.

Q5. You are yourself an explorer, Mark; and so does your central character Ravi Shankar. Is he, in any way, even a little, inspired by your personal travel experiences to the land of Rajasthan?

Mark S Levy: You bet that! Quite a few stories and snippets within AM came from my travels. Like in the Ladakh and Pushkar chapters. I have been to those places and loved them and including in AM made it easy to write about and also as devotion to those two magical places.

Q6. Because your fiction is calm and it suits the readers’ progress through the pages, we do have a question for you. What does fiction mean to you? As a reader and as a writer, does the meaning of fiction change for you?

Mark S Levy: Fiction is like taking a holiday and a distraction from your everyday life. And because I’ve travelled a lot, of course, I write about traveling allowing for the reader to discover places they’ve never been. Writers say writers write what they know. This is what I know.

Q7. As a reader, who are your favourite authors – in India and in your own country and then in the English nation? Did you, as an author yourself, ever try to copy someone’s style of writing?

Mark S Levy: I hardly ever read, and this may come as a surprise. If you write, you must read. Back in my college days, I read a lot, like JRR Tolkien, George Orwell. I know of Indian writers but haven’t read any. Am I a slacker? And I only know my own style.

Q8. How is the response from your American readers, Mark? In India, readers have liked the concept of your novel and they have appreciated it on different platforms. What does this positive response mean to you?

Mark S Levy: I love and appreciate how Indian readers have taken to this novel. Of course, it is written and sort of a love letter to India. In my country, US, not so much. A few people have read it, and there’s a couple of Amazon US reviews that are positive. But most people in the US don’t know much about India and certainly don’t travel there and consequently, this story may not be of interest to them. That’s the main reason I had published in India.

Q9. So, after this one, American Maharajah, have you planned some other theme to write? What will be your next venture in writing?

Mark S Levy: Yes, on my trip recently concluded in March to India and Nepal, I came up with an amazing idea for the third book and just now starting to write it. Of course, the story is set in India, and this time Nepal and Bhutan.

Q10. And lastly, Mark, how do you like it when you are in India? We sincerely hope India offers you another stunning theme to write another good fiction! All the best for your writings!

Mark S Levy: I love being in India, and mainly smaller towns, nature, peace. If I can sip on a chai and hear music in the air, I am in heaven!