Alerting the subconscious – Next 5000 Years: Memoir of a Hindu without a Tag by Kumar Dipanshu 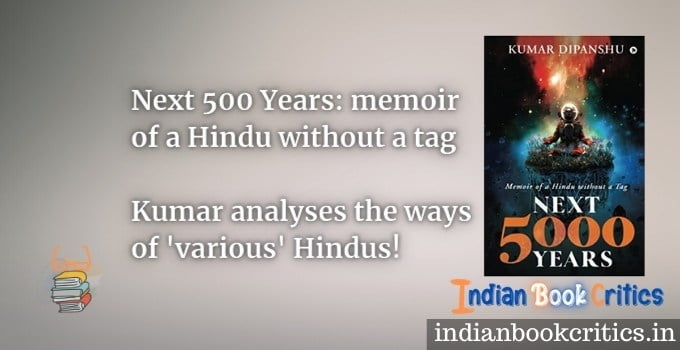 Next 5000 Years: Memoir of a Hindu without a Tag by Kumar Dipanshu has been released this month and the book has grabbed the attention of many readers who love to explore books written by co-travellers belonging to not a separate world altogether. The book might seem like a monologue when you read it and it has to be this way because it’s a memoir that is supposed to be read by readers of future generations… and this, at least, appears to be the case once you read the early pages. However, overall, the book hints at many problematic confusions, attitudes and the very resolve to come victorious in a kind of civilisation battle that Hindus are fighting without acknowledging (as the author assesses it to be).

Well, there are many books about Hindus, Hinduism and many aspects of the same. However, this one by Kumar Dipanshu seems to be contemporary (that it is because of the year of publication) in many ways. Not only because it’s published in the year 2021 but also because the author has experienced the innovations and revolutions like social media, public-side content or UGC (user-generated content), the massive influence of technology in our lives and so on… Kumar has tried to assess how these revolutionary changes in our lifestyle have changed our attitude towards ‘Dharma,’ ‘culture,’ and civilisation ‘savings’.

The book has been written with recent examples like Rashmi Samant’s case where she was subjected to Hinduphobia in Oxford after her election as the president of the students’ union. And recently, she has been vindicated and won the case. Why? Just because she was a Hindu and her parents love their religion? Kumar raises these points with various perspectives – how was the case and how should the approach have been in order to get more support of the people of the Hindu community and spread the awareness so that such incidents are not simply brushed off conveniently in the future.

The readers who are into the study of Hindu, Hinduism and Hindu civilisation may not find this book according to their taste. Kumar Dipanshu’s concern is with the lessening interest of youths towards acknowledging and embracing the tenets of Hinduism because of a general lack of awareness and, also, friendly guidance that could tell them why being a Hindu is important. For instance, he raises concerns for Moksha and emphasises that many and many people must be made aware of it. He also raises concerns about people using their status as celebrities on social media to raise selective issues that suit their purpose and ignoring the larger issues which might be more important any day. He cites a case of a young girl who sought a response from the government authorities about the veracity of historical claims made in the textbook.

“She had all the ingredients of transforming into a future leader, provided her enthusiasm was reciprocated in equal proportions from those who knew ‘more.’”

Kumar’s work may not be the book that offers profound and ‘sure’ commentary on Hinduism and its riches. However, his work is very important because he tries to analyse the current situation and the responses to it. And because it is written in the age of social media, it also includes the soft-power… and, to the downside of the book, mostly the soft-power that social media provides could make a place in the book discounting what goes on the ground. His primary issue, at times, fixes on proving that migrant Hindus are also a part of this journey and their opinions must be respected.

In a country where people are recently rising to acknowledge many historical episodes which have been distorted, and I will assert it as well, this book might work as a suitable medium to pause for a while and reflect on the ‘approaches’.

You can get a copy of this book from Amazon India if you wish to understand what Kumar has to offer.