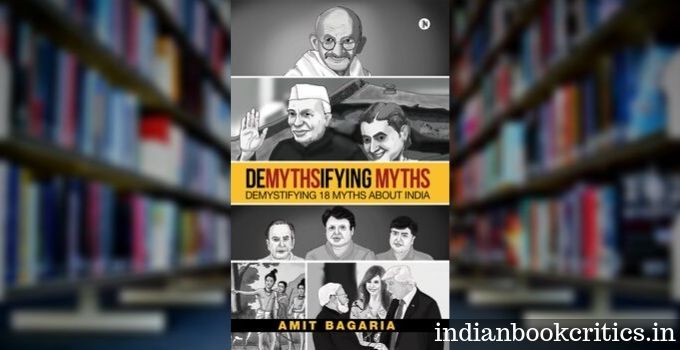 Since the very childhood, there are certain ideas of certain things with which we grow up. In India, we grow up knowing Gandhi as Mahatma, Nehru as chacha, Congress as the party of freedom fighters, our history and heritage as myths, mughals as the great rulers, and so on… However, do we ever try to enquire about the truth? Do we even care to know further about any claims that we are fed since childhood? Largely, perhaps no. The reason is – why do we care! Let’s move ahead with our lives and earn as more as we can. However, when we meet a leader who can lead us to the truth that lies in the depth of all these claims, we certainly love knowing it. I have recently read a book Demythsifying Myths: Demystifying 18 Myths about India. Written by noted personality in the field of business, Amit Bagaria, this book takes us to the depth of each claim that we have been fed as children and tries to check each of them for the validity.

There are total 18 rigid or flexible myths about India that Amit Bagaria has tried to tackle in his acclaimed book Demythsifying Myths: Demystifying 18 Myths about India. The author begins with the question of whether ‘India’ is a 5000 years old country or not. He moves on to a few questions related to Gandhi, whom we know as Mahatma and also the father of the nation. You will certainly be surprised by the facts that you read in the chapters related to Gandhi. Amit Bagaria then moves to questions related to Nehru and how did he become ‘chacha’ of the Indian children. In fact, there are many general beliefs related to the Gandhi-Nehru family that have been demolished with facts after facts and you will certainly be surprised to know the ‘hidden’ realities.

The issues like Kashmir, emergency, Hindu Rashtra, whether Ram was a vegetarian or not and the common myth about president vs prime minister in India are also dealt with in this book. Amit Bagaria has certainly written with an authority and tried to prove his points logically and systematically so that any reader can understand what he wants to convey. The language is also very simple and it becomes further effective because a teenager can also go through the book and so can an old man of 70. Generally, I have seen that books on such serious issues are written with a vain sense of entitlement and the language is so vainly standard that students of intermediate cannot understand anything. Amit Bagaria has tackled the issue of language effectively and his literature is available to all!

However, the general practice of such books is to include a list of references or the ‘further reading’ materials so that the ideas are further reinforced. Though much of what Amit Bagaria has said in Demythsifying Myths can be found in public domain with a little effort, still, the inclusion of a list of references might be rather useful for the readers who often doubt what they read.

Overall, an interesting and I would rather say a much-needed book in the contemporary scenario that can lead the readers out of many myths that have been nurtured and sustained for many decades in India for reasons known to many of us… Amit Bagaria’s attempt is commendable and this certainly is a Must-Read book for readers, especially the young readers who like to know the answers to many they questions they have in their mind.

You can get a copy of the book, in Kindle or Physical format, from Amazon India. Please click the link below to go to Amazon and buy this book: