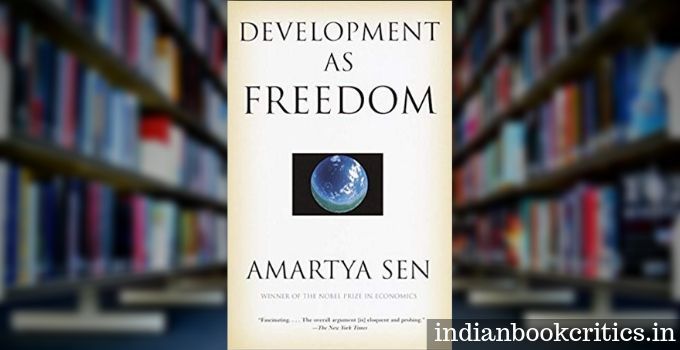 Since World War 2, the role of development has changed and transformed into sustainable development. The goals of nations have been shifted from mere growth to a sustainable development that aims at putting a certain trajectory of growth for a considerable time. We have seen enough destruction of humanity in a world war that shook our heart from the core and we were forced to be the welfare state. Though, after several years it has been transformed again to freedom. Many economists suggested the role of freedom and social development works is to bring a nation into the welfare state. Amartya Sen is one of those authors who has written multiple books on these subjects. His major concern is to understand the condition of welfare in the contemporary context and he tries to formulate a theory that can be helpful in uplifting the condition of deprived ones. His book ‘Development as Freedom’ expresses the same view that we are going to discuss today.

The book is written by Amartya Sen who is a well-known economist and Nobel Laureate in Economics. The book ‘Development as Freedom’ is a treatise on knowing the factors behind the growth of a nation in the real sense. How far we can move directionless, where growth is happening but the conditions of people are not uplifting? This is the core question that Mr Sen raises in his book. The world has changed a lot and necessity has raised to the next level as well. Freedom has become the most efficient game changer in this way.

The book argues about sustaining the means and utilising the resources in a way that can ensure general welfare for all. Though, it’s not so surprising that most of his work is associated with general welfare analysis. He argues about freedom in three ways, capability, availability and accessibility. If these three fundamental things are available for the people then there will a positive trend in welfare.

Positive trends in a certain sector can not insure healthy welfare in the country. Like Kuwait is the richest country in the terms of per capita income but they do not ensure freedom for all. He argues that where the world is growing at a faster level the majority of the people are denied even the elementary freedom. Is it something we have come so far for?

However, there are certain factors that have been ignored in the book. Sen’s arguments are based on the thoughts of classical economists and he framed into the words where capitalism has dominated society. He has ignored the class struggle of the 20th century. He has talked about institutions but he has forgotten that capitalism has rooted in all over the world and it has shown good results that are being governed by top intuitions like IMF and World Bank.

To add to the contradictions found in Development as Freedom by Amartya Sen, I would submit with this that Mr Sen argues for freedom to participate in the market but he also suggests that ‘certain’ degree of norms and regulations is must to keep the economy stable and running. And there are many other contradictions that an elementary reader in economics can bring out in this book.

Well, the book is a mixture of right and the wrong – assumptions. Most of the Sen’s arguments are normative that cannot be reliable in the complex world. There is a nice normative structure in the book that can be suited to liberal thoughts but in reality, on the practical ground of economy, it stands very far when confronted with the realities of structural inequality, highly rooted disparities. So, the book will be valuable for the readers to understand various sections of thoughts – liberal thoughts, neoliberal thoughts, classical thoughts and formulate their own thoughts on the basis of all these thoughts they read by Sen. You can get the book here:

Buy Sen’s book – click here to get from Amazon India