Don’t Believe a Word: The Surprising Truth About Language by David Shariatmadari – Review 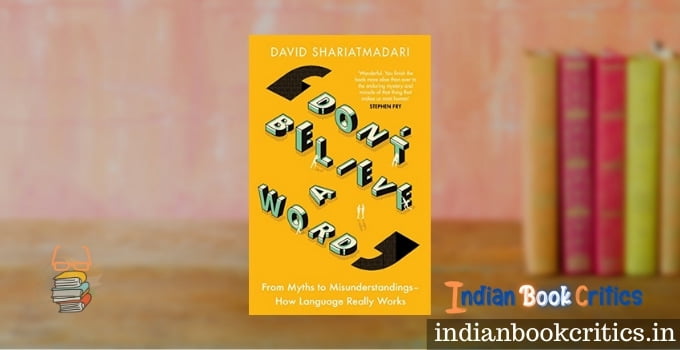 “Take the words “adder,” “apron” and “umpire.” They were originally “nadder,” “napron” and “numpire.”

I did not know because I am not into the studies of linguistics in-depth. However, knowing these details and how words keep changing over time did interest me a lot. I read the entire book in two days and the time was totally ‘worth it’. I seldom thought that a nonfiction title could be as interesting as this one. However, now that I have read the work, I am sure that many others like me will ‘enjoy’ this work by David Shariatmadari – Don’t Believe a Word: The Surprising Truth About Language.

The book begins with a lot of promises and delivers them to the best of the limited abilities of the author to analyse various languages, words and deviations or shifts over time. There are 9 chapters in the book and an introduction that shows some robustness and opens a new vista of information (as promised) for the readers who are really interested in understanding what is happening with the language they speak (majorly English). Well, in other words, the marketing of the product is quite nicely fabricated and fragranced with materials that you will love.

However, things go awry as the author descends into the depth of linguistic investigation and he seems more or less interested in telling tales rather than inquiring about the words. For example, using Reddit as a reference and telling that LOL might mean Lucifer is Our Lord rather than laughing out loud… FUCK might mean something else… he defines something as backronyms. Well, the tales that Shariat-Madari weaves are interesting and enough to keep the readers lured until a few more pages.

The information that I have pasted from the book right at the top of this review article might be ‘found’ as new for many readers who are not into deep studies of linguistics. However, any student who has studied literature must know more than what David Shariat-Madari exhibits to know about language. The entire book resembles that he has studied a few websites on the internet and contracted with a reputed company, because he works with The Guardian, to publish his ‘research’ that’s based more on tales rather than solid linguistic knowledge.

IN a chapter just before the concluding one, he writes:

“The wild claims made for Sanskrit are, these days, often linked to an ugly strand of Hindu nationalism that harks back to a “pure” India in which Muslims didn’t exist.”

This author doesn’t seem to know that Muslims didn’t exist, not only in India but in the world, before 7th-century! Well, ignore the fact, and focus on the politics of the language in the same chapter as our learned friend try to berate Sanskrit and promote Arabic… no issues with that as well. However, the book could have been more valuable for readers if it could have cut short the politics and presumptions and could have focused more on the promises that the author makes in the preface… chapter like Language is going to the dogs is absurd… what is a language? A language is a tool to communicate and if you cannot understand something, it doesn’t mean that ‘thing’ doesn’t exist.

David Shariat-Madari seems to have lost his taste for ‘modernity’ and has been searching for purity and a world where people don’t use shortcuts to express their emotions and thoughts. And therefore, except for a few pages in the book where you can find something to learn and ‘find’, the entire books seems to be a collection of conspiracy theories and random bubbles found on the internet and ready by millions every day.

Don't Believe a Word: The Surprising Truth About Language by David Shariatmadari – Review

Don’t Believe a Word: The Surprising Truth About Language by David Shariatmadari is a book that’s best avoided if you don’t want a mockery of linguistic studies…