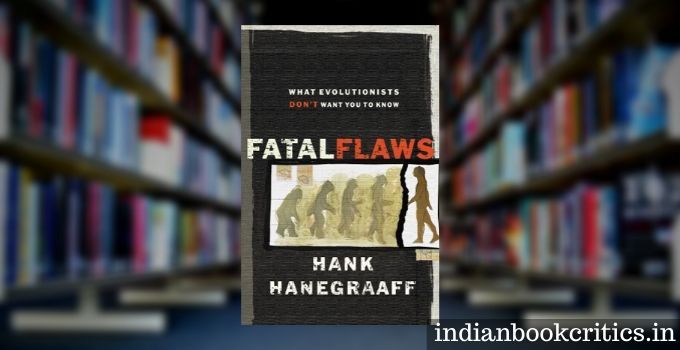 I haven’t been a fan of religious writings that argue recklessly and on the basis of emotive ideas. Well, – ‘emotive ideas’ – saying this is itself an irony because ideas are supposed to be logical, intellectual and on the basis of mental exercise rather than emotional muscle-flexing. Especially, the writings that are on the basis of a particular faith, downplay others and illogically proves that it has the upper hand are trash and nothing more than that. However, there are the religious books that offer you quite an amazing experience while reading and the aftermath is even more surprisingly pleasant because you have pretty much to think and conjecture and discuss with friends if you want. Gita, for example, is a book that is supposedly religious from a Hindu perspective of life but it has the things that are universal for everyone. Recently, I had the chance to read Hank Hanegraaff’s book Fatal Flaws: what evolutionists don’t want you to know. This is a book that is written with a narrow Christian perspective in the narrative but it re-digs some of the vital aspects that provide a tiny space to deny the evolution theory propagated by Charles Darwin in his legendary Origin of Species.

In this interesting book, if you look at it objectively and then read it carefully, the author has exposed some of the loopholes, ambiguity and contradictions in the theory of evolution as proposed by Charles Darwin. There are 6 chapters in this book and only about 140 pages. The chapters have been divided in a manner that it covers most of the Darwin’s Evolution and proposes the version of Bible or, I can be forgiven to say that the author tries to speak for ‘God’ himself. The introduction supplies the pretext of the book and the notes section at the end corroborate what the author has quoted, suggested, hinted and copied in terms of ideas as well. So, content-wise, the book is subtle and it does not make claims based on personal (emotional or intellectual) whims.

The problem with the book is that it only speaks for the Bible. Therefore, the audience of this book should have the knowledge of Biblical allusions to understand the ideas better or the way Hank Hanegraaff might have wanted his readers to understand. Though the author has himself made it very clear that the book tries to counter ‘science’ that extrapolates itself with Bible at the centre, still, too much of religious selectivity excludes the readers who come from other religious backgrounds. Moreover, a Hindu reading the text may quickly assume that Brahma was the ‘cause’ that created ‘an effect’ as beautiful as ‘universe’ and our beautiful earth. Abrahamic faiths come from an origin that is largely the same with some alterations as per the needs. They rely on texts that are of origins unknown and we (Hindus) rely on our history that tells us about Gods who came on the earth and announced that they are the ‘creators of this universe’. So, a chance for a religious conflict of superiority may arise after reading Fatal Flaws: what evolutionists don’t want you to know.

Objectively, the arguments that the author has pulled from the ancient and modern text are wonderful. ‘Survival of the fittest,’ ironically enough, the book notes, talk about the oppression of the weaker section of the civilisations of the weaker civilisations itself. If this was the theory of evolution then the ‘cause’ that created this ‘effect’ must be a hardened hearted person who cannot believe in co-existence. Moreover, towards the end, the book also raises questions on the very theory that the Sun is the source that offers us the energy to sustain and live. The argument that the book provides is that if a dead plant is brought into direct contact with the sun rays, it cannot live again but rather dies swiftly and decays – so, the source of energy alone cannot sustain our beings unless we have some spur from the inside that knows how to draw energy from the Sun.

Likewise, there are many arguments in the book that are logically driven to fantastic counters to the facts that were raised by Darwin and other evolutionists in their literature. However, getting everything parked under the shadow of Christianity might alienate the book from readers who come from another religious set-up, as I stated earlier.

To conclude, the book is a very good attempt at countering the theories (or parts of a theory) that have been absurd coming to this century and this year. The readers who believe in science blindly will have a tough time defending their stance. The readers who believe in religion more than science will have a peasant session with this book. However, and most importantly, the readers who are objective and take neither side will enjoy reading the book for its subtle writing and factual arguments. You can get a copy of this book from Amazon India by clicking the link below.

Fatal Flaws: what evolutionists don't want you to know

A book that argues pretty vehemently to counter the aspects of evolutionism that are absurd and self-contradictory to many.