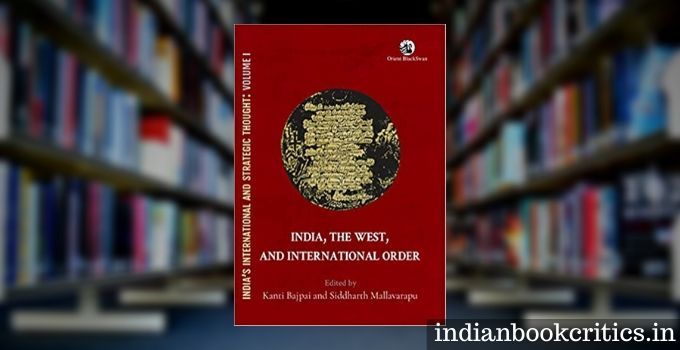 Sometimes, there are the books that you love to read; sometimes, there are the books that you love reading for different perspectives, different times, many times, time and again. The present book for review, India, The West, and International Order, edited by Kanti Bajpai and Siddharth Mallavarapu, is one of that lot. This book contains essays by various scholars, noted personalities, spiritual leaders and people with mass appeal. Beginning with the works by Swami Vivekananda, including the famous Progress of Civilisation, the first volume in the series India’s International and Strategic Thought by Orient BlackSwan contains works by Gandhi, Gokhale, Tagore, Savarkar, Golwalkar, Sister Nivedita, Annie Besant, and Sayyid Abul Maududi.

About the content of the book India, The West and International Order, there is not more to scrutinise because the content comes from those who have been known for their character and their works. Who can argue on the works by Vivekananda except being awed by the sheer brilliance of his order of thoughts that blessed the world? Yes, the choice of the works to be included in the book has been wonderful and it offers a lot to the readers.

I am truly impressed with the inputs that are in the book by these two, Kanti Bajpai and Siddharth Mallavarapu in the form of Introduction. These two introduce the very purpose of the book as well as the grand idea of international thought and its importance for any country. In the context of India, these two authors analyse various schools of thoughts after the independence of India – Nehruvian, Gandhian, Hindu-nationalist Views, Communist views and so on… However, when you will go deeper into the 50-page Introduction to this book, you will find that the editors have very beautifully introduced the 9 ‘Activist-Scholars’ and their ideas about India. They have also suggested how to read Indian thoughts. This introduction becomes very important because it is (Largely) unbiased, objective and lucidly explained.

“For all his dedication to Hindutva, he was an atheist and stood against castism and untouchability. Central to his thought was the view that Hindus are an independent race and distinctive ‘cultural unit’.”

This apt description of Veer Savarkar’s ideology clarifies very much of the misinformation that is spread about him and his thoughts in the public domain by certain parties with vested interests. Moreover, the very description of international thoughts in the introduction to this book is wonderfully short and profound at the same time.

“When we say ‘international’ and ‘international thought’, what do we mean? These are essentially contested conceptions, but we use the term quite simply to describe a body of thought that deals with relations between different societies.”

The authors go on to describe, again aptly, the reasons for the dominance of the West and the Anglo-American thoughts. And this is too simple, according to the authors, to understand:

“The Western and Anglo-American dominance of the field is not surprising: intellectual hegemony is related to political hegemony. Powers that aspire to shape and enforce international order must evolve ideas that help them in these tasks, ideas that inform but also legitimate policy.”

These sincere, apt and forceful excerpts are only a glimpse of the whole which you can read to understand the thought process of the editors of the book.

Well, I will not say that the book is a quality read for all and that it might interest every reader groups. However, the book will certainly be amazing for the readers who are interested in knowing more about Indian Thought and Indian Global Thought in the international context. There will be many volumes to come in this series as per the introduction by the editors to India, The West, and International Order. The editors and the publishers have planned to systematically present the Indian narrative from Swami Vivekananda to the modern ones like Man Mohan Singh. I found the book useful, enlightening and widening. I am sure many more readers will like it this way!

Where to buy the book?

You can get a copy of the book in beautiful jacketed hardback edition from Amazon India. Link to the book is below:

(note: the cons feature are just there for information – not the downsides of the book actually)

India, The West, and International Order