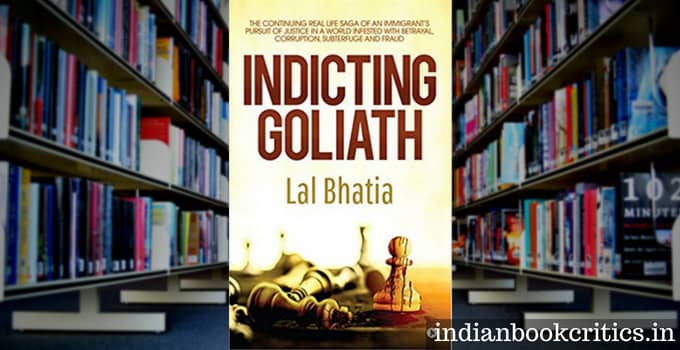 “But having left me to the mercies of a scrooge – Mon Wig, a corrupt prosecutor, a crooked FBI agent, my despicable relatives: Sheila, Krishna, Indru and Mitha, the kangaroo courts, at best, of Judges Wilken and Armstrong, and others, the U.S. Government should not be heard to complain in this matter. (In fact, they continue to be utterly silent on this point.) The true citizens of the United States of America, I would hope, have as great an interest in the integrity of my prosecution as I do.”

This is the premise on which the latest book being published on the justice department of the USA and their alleged involvement and collusion in a case of corruption charges the USA of denying justice to an Indian citizen who went to the USA with hopes and aspirations.

Lal Bhatia’s first book, Indicting Goliath, as metaphorical as the title seems, is a thrilling account of real-life incidents that he had to go through – torture, unfair prosecution, trap of his friends and business partners and involvement of higher level of government officials as well as federal judges and FBI against a scam that he would have exposed. Goliath, however, was finally indicted by Lal Bhatia and the USA tendered almost an apology to him in the form a court ruling that the prosecution was based on facts which could not justify their validity and that the charges which Mr Bhatia wanted to bring into the notice of FBI and department of justice were found to be true. The question that the author raises in his book is, then, why was he tortured and kept captive unfairly? What was his fault? Why was the justice denied to a citizen – just because he is an Indian or because he exposed a multi-million dollar money laundering scheme which involved some of the corrupt politicians?

Lal Bhatia has given the background of the case, the formation of the bank BCCI, Bank of Credit and Commerce International, which he calls a Bank of Crooks and Criminals International. He names all those who were involved in the cases and he also names the judges who were seeing his prosecution. He mentions in details how did the FBI try to break him down and accept the crime that he was trying to expose – they intimated his family, his daughter (minor at that time) and tried every trick that crooked could do in order to meet their ends.

“Previously, based on the conditions of release imposed in case 1: in addition, to being ordered to report to the pre-trial services often; my movements were highly restricted, I had to get court approval whenever, for example, I had to get a haircut; or take my wife to dinner, or my minor daughter for a father-daughter dance. I complied with those conditions without incident.”

One can imagine what one feels when he or she is punished without any valid reason or for a crime not committed! Lal Bhatia, in spite of being described as seminal and most brilliant by his professors, teachers and even his bosses and employees, had to face the unfair trials and prosecution which was lopsided just because he dared challenge the USA – the country people hold with the highest possible regard – but the same country failed to deliver him the justice!

Indicting Goliath, though a non-fictional autobiography of a person who single-handedly battled the colluding forces against him, will interest the readers a lot. It has all the elements that make a successful fiction-thriller – it has fear, it has ploy, it has a hero, it has the villains, it has the crime of a higher degree and it has a question – WHY DID THE USA DENY JUSTICE TO AN INDIAN WHO WENT THERE WITH A LOT OF ASPIRATIONS?

Get your copies of this book right now and join the battle against the Goliath and contribute your part in making sure that Lal Bhatia’s voice reaches to many and many Indians who are in India or any part of the world – will he get the justice due? Will the corrupts and crooks be punished? Get your copy of Indicting Goliath from the link below:

Buy the book from Amazon – India

Indicting Goliath becomes a fight where every reader becomes the David and the USA with all its wings remains as the crook Goliath which does everything to deny David the justice he deserves! A must-read account of Lal Bhatia’s life in the USA when he tried to expose the multi-million dollar scam. Get your copies now…