Made in India: A Memoir by Milind Soman – Review 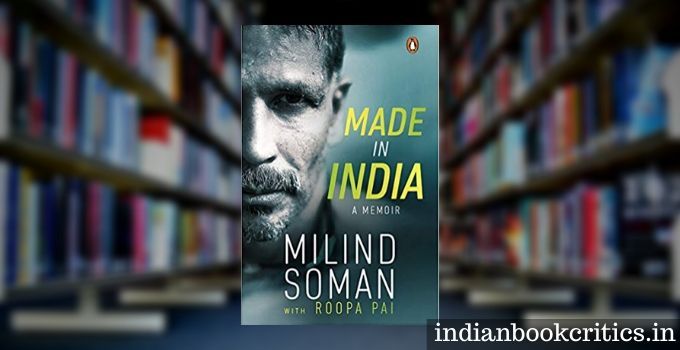 Made in India: A Memoir by Milind Soman is in the news not because of content but because of a statement he made during an interview to a channel and which went viral on the internet. He has also mentioned the same in his book that RSS was a part of his childhood and still lingers in his memories as ‘entirely different experience’ where ‘different’ connotes positivity. Milind Soman also reinforces in his book that the media of today tries to demonise the RSS which is contrary to his experience during his days at Shakhas. So, this is what has excited many readers in the country to read Milind Soman’s book – Made in India: A Memoir. However, is the book readworthy? Is there anything other than RSS memories in the book? Let’s get into it.

Being honest, this is the first time I have read any memoir of a person whom I did not know in details. I knew Milind Soman only as a model and an actor who acted in Captain Vyom, an old Doordarshan serial. Many details about Milind, that would never interest me otherwise, are offered by him in this book and these things begin with his schooling in England. The first girlfriend who dumped him when he (and her girlfriend also) was just 5. And the gravity of the subject can be understood by the fact that Milind was dumped because one of the friends of his girlfriend told her that their children may not be white… racism? At such a young age? And thus begins this book that describes a ‘Made in India’ who began building initially in the UK…

There is a strange (as many may not have expected this maturity and ploy by Milind) narrative that is devised in the autobiography of Milind. He has moved with his memoir and also a parallel memory that chronicles his 2009 Marathon in Mumbai. So, the two timelines go parallel… and that has been handled by the author (and maybe the co-author supporting him) in a very competent way.

The book has many important and lesser-known details about Milind’s personality, his life and his career as well as studies and family and friends and his experiences with girls. At the age of 18, Milind narrates, he did understand and used to take it easy when girls wanted to touch him and kiss his hands… well, anyone might want to do the same even now because of his looks and fame but at that time, he was a national swimming champion. So, as he states himself, it was the beginning of celebrity mode of him.

On the technical grounds, the book has been written (certainly with some expert supervision) in a way that it attracts the readers. The beginning of every chapter with some quotes by well-known personalities and then the imagery that has been used throughout the book keeps a hold on the readers’ indulgence with the narrative. The language and storytelling have been uniform and eventful. Milind has been successful in narrating the stories of his life in a well-defined manner.

The book will certainly keep the readers busy in knowing the unknown shades of Milind’s personality if they don’t know him completely. Moreover, for the readers who know a few aspects of his versatile personality, there is a lot in the book that’s unknown to the masses… It will be an interesting and meaningful experience for those who are interested in the phenomena called Milind Soman! However, on the downside, there are a few things that could have further added to the book’s overall impression, critically. While it is a good idea to acquaint the readers with many sides of one’s personality through a book, it might go over the counter adding too much complexity at the same time. Milind has tried to play a gym trainer, a fitness coach and a storyteller at the same time. The two timelines and the two narratives, entirely different, could conveniently have formed two distinguished books altogether. At times, this might be frustrating and baffling for the readers while switching from one mode to another. While, for others, it might be an entertaining way to cope with the book’s versatility and also knowing the author through his experimental storytelling.

Overall, the book has much good with a little confusion which might be subjective. The book has universal goodness and purely personal findings which might confuse or baffle the readers at times. If you are happy with it, you will be happy with it all the time! Made in India: A Memoir is a gift from Milind Soman to his readers who will certainly accept it gracefully… it is a testimony to the man he has become!

You can get a copy of the book by clicking the Amazon link below:

Buy the book – click to buy from Amazon India

Made in India: A Memoir by Milind Soman

Made in India: A Memoir by Milind Soman is a book that penetrates deep into the life of Milind and offers to the readers an insight into his childhood, his memories and his transformation from a celebrity to an inspirational fitness enthusiast.