Outnumbered: From Facebook and Google to Fake News and Filter-bubbles – The Algorithms That Control Our Lives by David Sumpter – Review 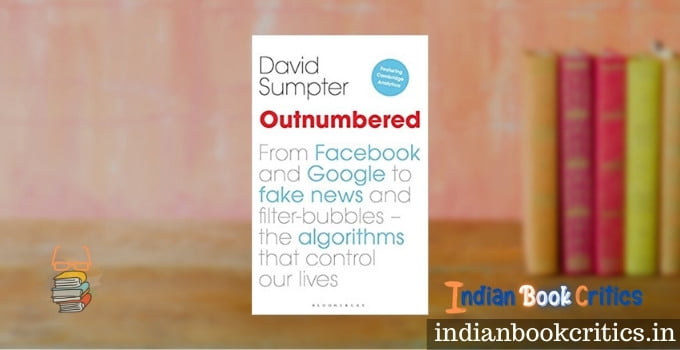 I am not a huge fan of Facebook. Except for its platform that allows me to ‘target’ the audience who might like Indian Book Critics and share our content, I rarely use Facebook. I had a doubtful faith that Facebook sees its users in terms of algorithms and this doubt has been vindicated once I read the book by David Sumpter – Outnumbered: From Facebook and Google to Fake News and Filter-bubbles – The Algorithms That Control Our Lives. Yes, you could see it right in the title – there are algorithms that these giant companies like Facebook and Google (including Twitter and LinkedIn) have developed, mastered, sharpened and utilised to ‘force’ content against us… and we do oblige by liking, disliking or just sharing… have you ever experienced that FB tries to read your thoughts and content, that you might like, pops up randomly on your wall? Now you will have too many questions… once you read the book!

The book is too technical, no doubt. It has been written by a mathematician and you can expect that. However, the book does really well in throwing light on many hidden sides of Facebook that you must know as a user. If you remember the recently launched and much-touted documentary movie The Social Dilemma, you should also remember that you become a product if you are using a product for free… the same stands true with Facebook and many platforms like Instagram, Twitter, LinkedIn, Spotify, and even search engines like Google and Yahoo. The more you use these platforms, the more these platforms know you, analyse you, make the right assumptions about you and start ‘using you’ as a product. Who are the people who use you? Does the algorithm do it by itself? Does the software have the power to do all these things? No! The book tells you what is behind the curtain:

“It isn’t really the algorithm that is clever. The intelligence comes from the alchemists, who are putting the data together with their own understanding of their customers.”

Facebook, as a platform, gathers as much information as you give. Additionally, it also, with the help of its ‘beautiful’ algorithms and prompts, tries to extract (or even extort) as much information as you can give to it. And then, the ‘alchemists’ behind the veils profile your personality with the help of data you provided with your consent… with your consent only, they also know about your contacts, their preferences, how much you interact with whom, what products you buy, what websites you visit, what religious faith you follow, what political views you have and which countries or states you might spend your next vacations… did you think even once before allowing a highly advanced AI know all these things about you?

The book reveals many things about these social media platforms and search engines do, can do and possibly will do in the near future with the data that they collect from us, users. Problems like political bias, fake news, racism, sexism, trolling and so on… the book also reveals many hidden sides of ‘global capitalism’ and what it can bring in the coming years. Though much of the book seems like (and it is) a case study of events that have already passed, the book is not only informative but also alarming, a little boring at times and very useful.

On a certain page, the book countersigns what has been accepted by the Silicon Valley tacitly, then a little reluctantly and then openly by suspending Donald Trump, the incumbent president of the United States, from all major platforms. Sumpter writes:

“These social media sites help spread and share varied information, albeit with a slight liberal slant.”

He has detailed before this line occurs:

“Twitter’s ranking algorithm changes these underlying sentiments. Computer scientist Juhi Kulshrestha and her colleagues found that searches for Hillary Clinton on Twitter during the election, tended to reveal tweets that were more sympathetic to her than reflected in the overall sentiment of the tweets made. Searches for Donald Trump, on the other hand, reinforced the negative image of the candidate. As in the UK, Twitter users have a slight liberal bias in the US and the way Twitter filters this bias serves to (slightly) increase it.”

In India also, users can easily witness Twitter’s left-leaning algorithms and agendas… is it time we should look beyond social networking websites to be social? Is it time we should go beyond fact-checking websites which are complicit in spreading fake news themselves? Is it time to shut the doors that can allow these data-hoarders to know more and more about our lives? Think about these things as you read this wonderful book by David Sumpter.

Yes, the book might be a little troublesome for the readers who do not understand the mathematics that well. There are graphs, plots and technical terms that a mathematics student will grasp easily and quicker than one might do otherwise. However, the content, interviews and opinions are too convenient to be understood by a reader with average math dexterity. Go ahead! Learn about your destruction with data and be alert!

You can get a copy of this book in digital as well as physical edition by following the link below:

Outnumbered: From Facebook and Google to Fake News and Filter-bubbles – The Algorithms That Control Our Lives by David Sumpter – Review

You will enjoy reading this book even if you will think of yourselves as fools who have given open and free access to tech giants like Facebook and Twitter to sip data out of your mind and even hearts… enjoy, learn and be worried! Well, the book is a little too technical…