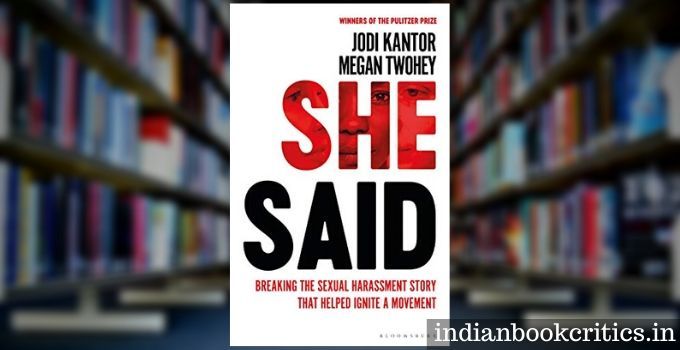 Good books are rare. Rare books are good. It works both the ways. However, some books are there that make you think – is it rare? Is it good? Or is it just a simple book hyped to the level of confusion? Recently, I read a book, New York Times Bestseller – She Said by Pulitzer Prize winner authors Jodi Kantor and Megan Twohey, investigative journalists. She Said claims to be a book that records the wrongdoings by now notorious Hollywood icon Harvey Weinstein. The book is a long (and maybe tedious) read.

There are some cases when the aim is right but the actions or the ways to reach that aim might be wayward, confused or, in the case of a book, dull. She Said is a book that can be said to be highly influential, urgent and timely. However, the content is dull at times because many readers who are casual lovers of book-reading cannot navigate through all the pages and digest the slow pace of the book. Harvey Weinstein’s atrocities against the women who worked for him maybe an interesting topic for the readers who want to know how perverted the person was. However, the writing is journalistic most of the times. The narrative is slow and the pace is dull. The content also contains occasional propaganda by the authors – targeting Trump (which they are entitled to do).

As I said earlier, such a book was the need of the hour. She Said is a powerful entry on the list of books that give rise to the voice of women, against the crimes against women and against the sexual usualism. The authors write:

“Sexual harassment was against the law—but it was also routine in some jobs. ” (from the Preface)

She Said compiles the famously infamous scandals and allegations that various women have made against their employers, seniors or even against the now-president, Donald Trump. However, the book zooms in and focuses on Harvey Weinstein, the notorious film producer who is claimed to have harassed the women and his coworkers for more than 30 years. Is it normal? The book is the successful completion of the restless war that is the need of the hour – war against perverts.

When you read the book, you can also find some things that repeat in the course of the narrative. These repetitions are usually against the people (I won’t name) that NYT might not like. However, is journalism free of sexual abuse? Is journalism free of harassment against women employees? NO! Millions of women around the world did join the #MeToo movement and that also included some of the famous journalists and we want to know how does the press react when the perverts are from their very own den!

She Said is a powerful book! I said it many times and will say it again when I get the chance. However, the readers who might be interested in this book will be rare to find among modern readers. People above 30 will be the general ideal readers. However, people below 30 with a strong interest in causative literature can read the book with huge interest. It does serve a purpose. The speed may be dull; the narrative may be journalistic but the literature is superior because it has a cause.

You can buy the book from Amazon India and read it in Kindle or paperback versions. Link:

buy the book – click here to buy from Amazon India