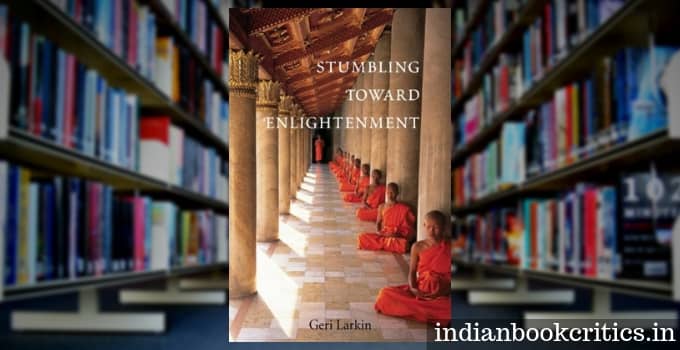 In the series of books that talk about enlightenment, spirituality and religious awakening, the books on Buddhist teachings are very popular. These books just come after books on Hinduism because with sages like Swami Vivekananda and Paramhansa Yogananda, Hinduism takes a large canvas and paints with vivid colours as various ways to reach that supreme height we often dream about. Today, I will be talking about a book titled Stumbling Toward Enlightenment. This book is written by Geri Larkin and it comes with Buddhist teachings to discover oneself – that’s what enlightenment means there and perhaps, everywhere.

Divided into twenty-four chapters, the book begins with an encouragement that if the author can (or metaphorically, anyone) then the readers can also walk through that tunnel and reach the incessant light that’s coming from somewhere – divinity. She writes about the core tool of reaching enlightenment through Buddhism is meditation with a sharp ‘focus on breath’. Here, one thing would be necessary to be mentioned – meditation is always important. In Hindu texts, whether these are Upanishads or Vedas, meditation has always been a concept that’s almost essential for the Sadhaks. And, as Hinduism is considered as the root of Buddhism, we are seldom to find something different other than the tenets that Buddha ascribed.

As we stumble through the book, reading and learning, we know that the author has focused more on experiential writing. Whatever she writes comes from within her reach – something that she has experienced she wants us all to experience the same. Here, this book becomes different from many other books, especially by the authors from a Christianity background. Most of the times, many books on spiritual enlightenment focus only on the abstract – something that neither the author nor the people mentioned have experienced. Geri writes about the things she has personally experienced and this gives weight to her arguments and theories. She writes about calming oneself, managing one’s anger and then becoming kind and giving.

However, the conclusion of the book might not suffice the ideas in forwarding or the lofty claims (dreams) being made at the beginning of the book. It is on the part of the author – Buddha did never promise Nirvana for everyone. He lived and died like a common man and that’s what we are destined to be. If Nirvana is possible, enlightenment is possible, that’s only on this earth. So, we have to do our Karmas; we have to complete the cycle of this life. And at the end, Geri Larkin also says the same.

Nevertheless, with ups and downs, the book Stumbling Toward Enlightenment makes an interesting read and the readers have some time to think and some time to revel. You can also enjoy this book and see through the contradistinctions or ideas yourself – get a copy by following the link to Amazon India below:

A meditator’s or disciple’s experiences translated into a book… to judge it, you should read it. It’s good for those who seek motivation before doing something.