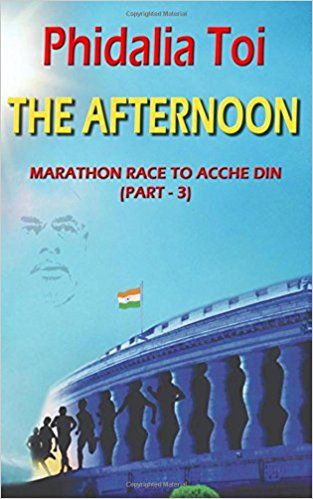 Phidalia Toi has come up with the third instalment of her book series Marathon Race to Acche Din and her book is titled this time – The Afternoon, as proposed. The Afternoon: Marathon Race to Acche Din – 3 is an analysis of the third year of the central government which is led by BJP and with Narendra Modi as the prime minister. Like the previous two books in this series, this one is also made of an in-depth analysis, valued research and important opinions. Phidalia Toi, as an author, very well understands her role and objectivity and dignity while writing a political non-fiction. And we find these traits in her author-career continuing with the development of this popular series – Marathon Race to Acche Din.

The Afternoon comes with 17 chapters which are divided to accommodate the most important events and actions and policies which dominated the third year of Modi’s prime ministership. Surgical Strike, Demonetisation, Economic Policies, Foreign Diplomacy, Students’ Movement, and Social Development Policies are featured in this book. Well, you will find, for the facts, nothing new than what we have been witnessing in different newspapers and media. Phidalia has just collected the information spread across various public domains and presented them to the readers but what we find important along with the researched views are the thoughts and opinions of the author. Moreover, those random pieces of information coupled with the views of the author become a wonderful experience for the readers as they have the chance to read everything at a place.

The Afternoon: Marathon Race to Acche Din offers an insight and a rather broader view what we generally miss in the mainstream media, to be specific, the electronic media. While anchors are indulged in debates and discussions which lead to futility and newspapers too, at times, are filled with editorials with propaganda, what we need is the fact and also the views by someone who can both the sides of a coin and Phidalia has done the same in this book. For example, she analyses the problems related to students’ union at the campuses and their real problems very well. She also brings out to the light which never saw it! In the chapters related to demonetisation, she writes about the problems which did never become a part of an editorial in The Hindu or Indian Express and never did they become a part of some fiery debate on the TV channels!

Reading this book does not only bring to us the government of the day and its policies in black and white but also brings a gust of hope because we get to know in actuality that what Modi has been doing with the nation’s reins in his hand! And this, I believe, is the best that a reader could get from any book! Especially a book on politics because we all know what most of the books of this kind are – innuendoes and agendas! On that front, Phidalia Toi and her The Afternoon: Marathon Race to Acche Din – 3 are to be commended for the job!

For all the folks interested in politics and just for the sake of general awareness about the government, I will suggest reading this book asap. You will have all the major information and assessment you need about the 3rd year of this present government at the centre. You can get a copy of the book from the Amazon link below:

The Afternoon on Amazon India

The Afternoon by Phidalia Toi

A good book for the lovers of political books and also for the general people who just want to know what’s actually happening from the side of the government.