The Evening by Phidalia Toi – Review 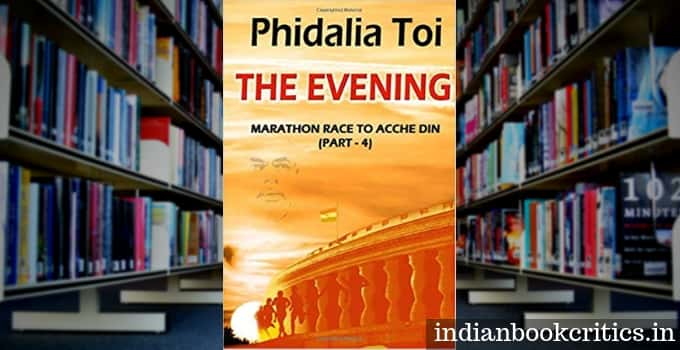 Phidalia Toi has established herself as a critical analyst of the NDA’s second term at the centre. Her series – Marathon Race to Acche Din – has appeared in four parts already and the final instalment is due, the fifth one. Right now, I will be reviewing her fourth title in the series – The Evening: Marathon Race to Acche Din – IV. Unlike the previous instalments, this is a bulky book and has more than 300 pages; 314, to be precise and factually correct. So, reading the book is going to take some time and it is meant to be read by the people who want a critical assessment of Modi’s fourth year in power. Are you one of those political curious readers?

In her pre-text pieces to the book, Phidalia Toi clarifies that she does not want to be seen as an expert analysing the government’s performance; she just wants to convey what she feels and thinks, as a layman, about the central government’s performance in the fourth year of its tenure – a critical year, before the general election.

She has divided her latest book, The Evening, into 12 chapters and each of these chapters discuss different issues related to the government’s agenda, endeavours and vision. She has discussed these issues in detail; she has given space to different opinions within her opinion and she has cited the sources wherever she felt the necessity to do so. Moreover, there is also an implicit pain which can be felt by the readers – being strangers among our own – the plight of the people of North-East India. Phidalia has discussed, in detail, this issues very passionately. She has hinted it in her preface as well. She has also written about the Act East Policy of Narendra Modi’s government and also the response of H. H. Mohrmen to it. However, she has given the due where it’s needed – Modi has tried to turn the tables and work fastly for the North East’s development.

Phidalia has warned and also suggested a few useful steps which could help the government(s) tackle the agri-situation in India which is, in this or that way, getting worrisome day by day. The steps taken to benefit the farmers and help them get the best monetary rewards for their products have also been discussed. After the farmers, she has also introduced the readers to the tacit confrontation between the judiciary and the executive divisions of our democracy. Other aspects of the governance, along with the presidential election and then the VP, have also found a great analysis in this book. There is not much to comment upon Phidalia’s opinion because she has stuffed them with facts (published articles and opinions) and only offered her objective commentary on the same. Readers can certainly feel a sense of oneness with her opinions!

The Evening, on the whole, seems a promising re-counting or a recap of the days in the fourth year of Modi government at the centre. Readers can look back and the politically interested people can certainly have something to introspect if they read the book carefully. This time, since the first publication of the first instalment in the Marathon Race to Acche Din series, Phidalia has come up maturer and sober in her attitude as a political commentator; she has created a connection with the readers and this will certainly help them both – the reading side and the writing side.

You can get a copy of the book from Amazon India by following the link below:

The Evening is a recapitulation with factual analysis of the Modi government’s fourth year at the centre… it will be of certain interest to the readers who are into the politics as well as general affairs.