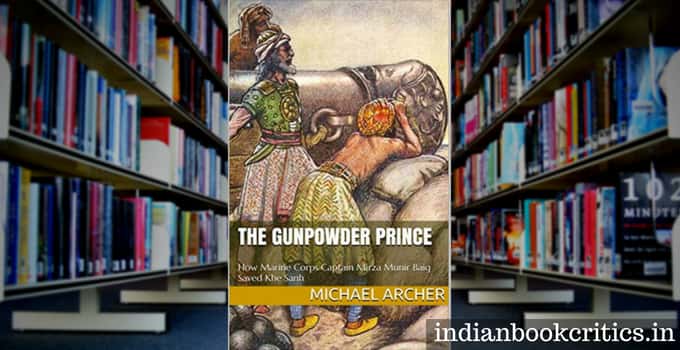 Book: The Gunpowder Prince
Author: Michael Archer
Review by – Aditya for Indian Book Critics
Publisher: Amazon Kindle
Year: 2018
Rating: 5/5 stars
Highlight: For all those who want to know the person who won Khe Sanh for the USA in the historic battle, reading Michael’s book is MUST!

Michael Archer’s latest book on the battle of Khe Sanh has become very popular among the readers of this genre, the war-history, one can say to make it look like a genre. Setting aside the nomenclature, I would like to share my experience with this book. I am sharing my book review for Michael’s The Gunpowder Prince: How Marine Corps Captain Mirza Munir Baig Saved Khe Sanh. I won’t keep it long; I will keep my thoughts succinct. At the outset, let me tell you that I am not that much regular a reader of the books in this genre but the way in which Michael has narrated his book, in the first person as he is a witness to what happened at the Khe Sanh, is amazing and it arouses the interest in the readers to know more and more!

The main purpose of this book is to bring to light a hero who wasn’t acknowledged duly for his heroic and masterfully conducted war management at Khe Sanh – Captain Mirza Munir Baig. Michael has worked in the US Marine alongside Captain Baig and he had a great chance to closely observe and analyse the activities of Captain Baig. And that’s why Michael could do the justice with this book because he is not merely relying on the documented records of the battle; he is stating the facts that he lived and witnessed on the battlefield which was surrounded by 30,000 men of the NVA!

Why did Indian Book Critics pick up this book for a review? Perhaps many of our readers must not be knowing that Captain Baig was born in India and his ancestors have links with Indian history. To know the history of the Khe Sanh battle and to know how did Captain Mirza Munir Baig single-handedly save the lives of those 6,000 US Marine personnel would certainly make us proud as Indians!

Michael Archer, the author of his appreciated book and also acknowledged by the reputed magazines in Vietnam, has given the background, the build-up and finally the account of Captain Baig’s highly successful war management who made an almost impossible war into a successful one. He also reveals some facts about the CIA, the enemies and other international claims which many people knowing about the Vietnam war might not know. Such as this claim by Archer is sensational:

“The Muslim League, however, rejected the idea of immediate independence and committed itself to working closely with the British Raj authorities, hoping it would garner British support for a later partition of the country.” (page: 15)

He discusses the situations at the beginning of the Second World War and writes that while Congress led by Gandi decided to boycott the British and offer a support in the war unless they declared India a free state, the Muslim League closely worked with the British!

Thus, this book does not only offer us a detailed account of the Khe Sanh battle and Captain Mirza Munir Baig’s skills, it also offers us some revelation that we might not have any idea of! The Gunpowder Prince is interesting, to the point and factual account of the events which led to the Khe Sanh siege and the bravery and knowledge of the prince – Captain Baig! It will certainly interest the readers who like reading war books, history of politics and also the realistic account of thrilling battles. Get your copy from the Amazon link below:

review by Aditya for IBC

We would recommend this because of its authenticity, factual evidence and the style of the narrative by the author – the Khe Sanh battle revealed for one and all! Do read this one by Michael Archer!