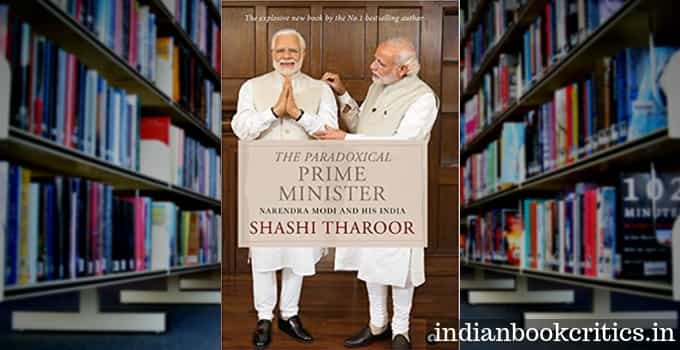 The Paradoxical Prime Minister is another piece of garbage written by ‘considerable scholar’ in his own words, Mr Shashi Tharoor. According to many persons, the author is accused (by many media persons indirectly and directly by Mr Swamy) of his wife’s murder. Nonetheless, he is a celebrated person among the Lutyens zone in New Delhi and amidst the crowd of self-proclaimed intellectuals. His achievements, other than being an MP and a minister in the past, are having many wives and sporting a forced accent when he speaks English. Let’s talk about his book – The Paradoxical Prime Minister, a book he claims to have written neutrally but is found entirely biased, politically inspired and rather a personal jealousy.

In recent days, many unnecessary controversies are being created by the author just to fuel the sales of the book. However, those who know actually know what is in the name of substance in the book – a person’s personal assumptions being sold as a ‘neutral’ observation based on ‘years of close observation, personal encounters with Modi, considerable scholarship, a deep understanding of Indian politics and an insider’s view of the way in which government functions’.

Shashi Tharoor, undoubtedly a charming personality for the ladies who sit to debate at 9 with a particular political leaning in their hearts, has drawn a rather clumsy figure, maybe in haste too, of the popular prime minister of India, Mr Narendra Modi. He has overlooked many things and ‘overly-looked’ many things in his book. He has magnified the unfortunate incidents which have taken place and were fueled otherwise only to be proven as false propaganda by the biased media and a few opportunist politicians. A fly sitting on my head and a mosquito biting me during the sleep are also the failures of Mr Narendra Modi because he is silent – he had to speak as my prime minister. And when Modi decides to speak, they leave the assembly saying that he is accusing them – why not? And tomorrow, a person will come and claim, decorated by the tallest word in the history of English language, Modi is a paradoxical figure.

Mr Tharoor, for persons like you who cannot apply their ‘basic’ level of common sense, even an ant will be a paradox because it can lift multiple times of its weight; do you see, sir?

Right from the beginning, you will find nothing in the book except some of the cunning use of words in English and that can be termed as merely being a charlatan and nothing else! The Paradoxical Prime Minister is filled with hatred against a man, disrespect for the post of prime minister of India, shame for being born in a country where people speak Hindi, the usual urge to create a north-south divide in the country and also a sense of hurry to prove loyalty for one certain family in India.

Verdict:
You will only feel anguished after reading the book – was it worth it?
Don’t spend your precious time on this piece of usual non-fiction; let it be where it belongs – in the dustbin where you usually throw the political banners after each election. Take care!

If you still want to buy this worth-dumping piece of literature (should it be called literature – that’s a separate debate), you can get it from Amazon India:

You can read it for the diction which is cunning and somewhere splendid too… of the substance, there is NOTHING! Avoidable by all means… a perfect example of literature as a political propaganda!