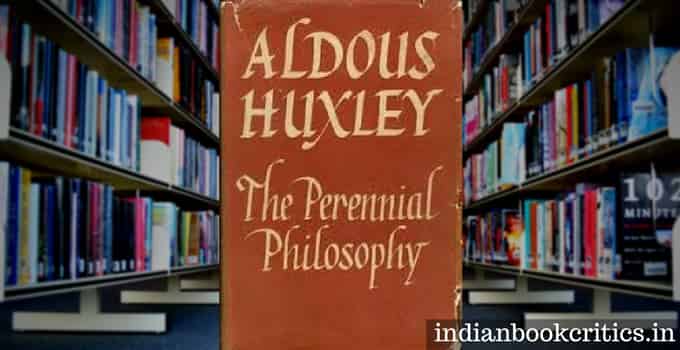 Book – The Perennial Philosophy
Author – Aldous Huxley
First Published – 1945
Pages – 319
One line review – “You won’t be thinking anything after reading Huxley’s opinion on various other opinions by others!”
Rating – 4.7/5 stars

Who is other? If we ask this question, we will deliberately lead ourselves to believe that there are the people who are not ‘our own’. This is the very thing that was, is and (may be possible) will be done by us. Guess what? We don’t want to understand any other’s point of view and we want to ‘settle the score’ instantly by proving that ‘ours is betters than theirs’… and the world goes on!

After the Second World War ended, Aldous Huxley, one of the most learned scholars in the entire history of English literature, came up with his innovative and interesting book The Perennial Philosophy in 1945. I am lucky to be owning the second-hand copy of this book which was published for the fifth time by Fontana Books in July 1966. One word for this book? Gem!

As the title makes it evident, the book is about philosophy which is perennial – never ceasing! Huxley has told his readers what he found when he spent his days and nights mining the scriptures and ancient texts of various religions and sects. His expression and his thoughts are remarkable and his findings are a bit surprising to most of the readers; he has found and acknowledged what we generally ignore! Huxley’s own philosophy is born after the amalgamation of various philosophies from across the world and the message that comes out is plain and simple – let’s be tolerant!

“A person born with one kind of psycho-physical constitution will be tempted to identify himself with one set of interests and passions, while a person with another kind of temperament will be tempted to make very different identifications. But these temptations (thoughts extremely powerful, if the constitution bias is strongly marketed) do not have to be succumbed to; people can and do resist them, can and do refuse to identify themselves with what it would be all too easy and natural for them to be; can and do become better and quite other than their own selves.”

Isn’t it true? Isn’t Aldous saying the truth about the society, which he thought to be true that time and is still very true? Aren’t we, as a society, caught red-handed in his talks?

The Perennial Philosophy is all about the thoughts which are very powerful and impressive to read. It has quotations from important figures of all the religions and important scriptures of all the sections of the society. Hindu philosophy, Islamic philosophy, Christian philosophy, Sufism, atheist philosophy and so on… everything is included. He takes the stance on Upanishad’s extracts; he takes his opinions on Rumi’s philosophies; he considers Hans Denk, Plutarch and many others that you know and may not know!

To put things in perspective, Aldous Huxley’s classic, The Perennial Philosophy, is a book for all seasons – for everyone and for every purpose. Whether you need to critically study what a cultural and religious philosophical amalgam would look like or be it something different… Reading this book will leave no room for any complaint whatsoever…. appreciated widely in the times when the book first came, it is still the same among the lovers of Huxley-layers… enjoy the book, readers!

Review by Amit for IBC

Not for all the readers… but for those who will read the book, will be more than just entertained!