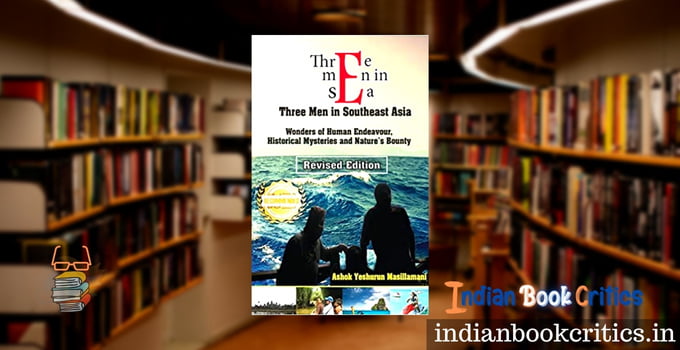 Three Men in Sea is a travel memoir by Ashok Yeshurun Masillamani. It may only be a simple introduction to the book by Ashok that does extend beyond the periphery of a travel memoir. It ventures into the domains of history, guides to places and also a short introductions series where you can easily get information on the backgrounds of many things, events, historical episodes and more. The full title and subtitle of this book read this: Three Men in Southeast Asia: Wonders of Human Endeavour, Historical Mysteries and Nature’s Bounty. You can understand by looking at the cover that this book is not from a lot of those ordinary travelogues we often find.

All major places tourists visit in Southeast Asia find mentioned in this detailed, lengthy and interesting travel memoir. The author, along with two of his friends, has visited Thailand, Cambodia, Laos, Vietnam and Sri Lanka on this grand tour. Well, Ashok writes at the beginning of the book about these countries very favourably. He makes a very striking declaration as well.

“These countries are best visited as a traveller, not as a tourist. Yep! There is a whale of a difference between the two.”

And I totally agree! As a tourist, you come and go. Take photos. Share. As a traveller, things are different. There is no intention. There is no fixed routine. You have the sky to explore. And that’s what these three travellers have done on their leisure tour. Any reader who wants to learn about these countries mentioned in the book can read it and thank the author. The book is good, detailed and documented observations made by the travellers and also an acknowledgement of the great history associated with what is being described (and that goes on).

Another interesting part in the book comes after the tour ends and the traveller has come back home to ponder. Though the chapters Vignette and Aftermath are generally informative, the author should have been careful with his ‘freestyle’ commentary on vast terms like ‘Hinduism’ and ‘religion’. In a dedicated section, the author argues that Hinduism is a fake religion and gives no evidence or citation for the same. He bases his arguments on the ill-found theory of Aryan Invasion and even calls Brahmans or Brahmins outsiders. The fake theory of the Aryan invasion has been categorically rejected many times since its inception by the British for their vested interests. It is sad to see learned authors comment on such issues recklessly. (https://www.deccanherald.com/national/new-dna-study-challenges-aryan-invasion-theory-759635.html)

Overall, the book is interesting and informative. However, the ‘Aftermath’ makes things interesting and intense. While the author should have been cautious while making claims about historical episodes, it might work until one is talking about ‘general’ things. It might overdo for many readers, and all the excitement and interest generated for the book might be lost in the North-South divide that the book may have created (subconsciously).

To end this review, the chapters on the exploration of the four historical nations of Asia will be useful, interesting and ideal for those who are making plans to visit these parts of the continent. There are some personal episodes in the book as well. These episodes add colour to the concept of group travel (where we learn and enjoy together). And those interested in knowing the world without going may have this book on their study tables on Sundays… Enjoy!

Three Men in Southeast Asia by Ashok Masillamani is a rich memoir or travelogue that contains more than just memories. You will enjoy it and learn from it at the same time. The author has taken travelling to a whole new level.