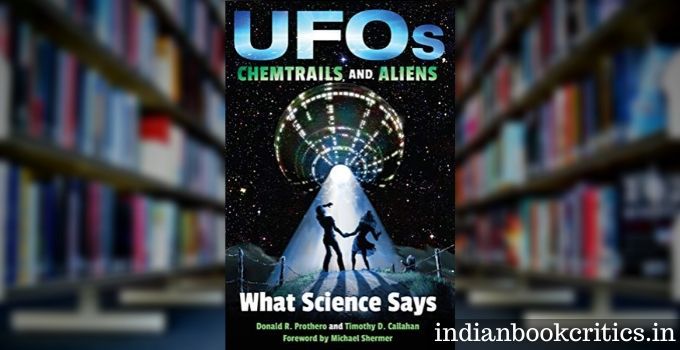 Science has certainly changed the way we live and die. It has penetrated deeper into our veins and it has traditionally been challenging the very idea of God. It’s a different matter altogether that most of the greatest scientists in the world have been the greatest believers in God. However, there are the scientists who begin their science with ‘doubt’ and this is, I must admit, a very good beginning at times. The job that scientists must take is to challenge the ‘perceptions’ and offer determining facts. Recently, I came across a very wonderfully written book by Donald Prothero and Timothy D. Callahan, two of the greatest in the business of (mostly academic) scientific writing. Their book, UFOs, Chemtrails, and Aliens: What Science Says, tries to come to a conclusion on the ideas of these supernatural or paranormal or extraterrestrial things.

The book has been written in an authoritative tone and the authors try to look into the claims of UFOs. They begin very well by defining the idea of science and who could be a scientist. There are 14 chapters in the book and these chapters are systematically placed so that the readers can have the most out of the book. The authors have tried to break down the ideas surrounding the curiosity that anyone interested in Aliens could possibly have and they arrive at a conclusion in the 14 chapters and they give their verdict that NO – there are no right claims of aliens and all claims are hoax, wrong or otherwise.

The book seems to be an apology for not being able to decide whether one should believe in the actual accounts (as narrated) or not. There have been many claims of UFOs sightings and alien abductions in the past, and the authors argue, and also numerous movies have been made on those stories. I also remember one by Scott Adkins and that was amazing! However, were there any scientific truths in those claims?

With statements like the above one, a reader is taken into the world of anti-science where science rubbishes everything scientifically. The authors have their verdicts on everything that even remotely relates to the ideas of UFO and anything ‘alien’.

“… we can logically surmise that these narratives are psychological constructs rather than memories of actual events.”

The authors ruthlessly massacre any claims made by anyone who claims to have seen, interacted or travelled (really) with aliens. Commenting upon the claims made by a person who believed that he travelled to attend a conference on Saturn with one of his alien friends, the authors correctly point out:

“… and that the atmospheres of the outer planets are mixes of hydrogen, helium, methane, and ammonia—and that those planets are far too cold for our type of life.”

As a firm believer in science, I would ask – have the authors been into outer planets themselves? How many scientists have landed on Mars (if you believe the Moon landing or think that to be a hoax)? How can we determine the atmosphere of a place without even being there and just with the figments of the imagination – this might be that?

Problem with the book – UFOs, Chemtrails and Aliens: What Science Says:

The authors have concluded that there have been no alien contacts. They think that all the claims of aliens visiting earth or otherwise have just been made after watching the TV serials and movies. Giving scientific (and what is science by the way – a compilation of data or beliefs piled one after another) – but rubbishing every other idea just because that does not suffice to be science for a scientist won’t work better for either – science or no-science.

Should you read it?

The book is INDEED interesting for the ones who are interested in knowing more about UFOs and their viability. There are many claims that have been spaced in the book. There are also many excerpts and quotations by great people and from great books that will enlighten the readers about various aspects of science, UFOs and science system. This is a healthy read but you should not take the words by the authors to be final. If science is about proving things wrong, probably there will be some better science one day to prove these two great authors wrong! 🙂 Get your copy from Amazon today if you want:

Buy the book – click here to get your copy