Urban Naxals: The Making of Buddha in a Traffic Jam by Vivek Agnihotri – Review 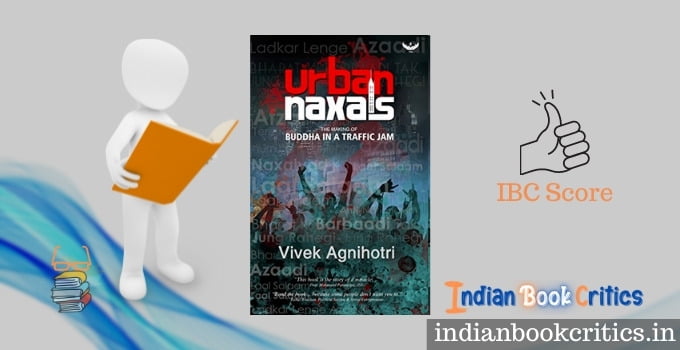 Urban Naxals, a very popular title by director and screenwriter Vivek Agnihotri, published in 2017, is about the making of the movie Buddha in a Traffic Jam, as the subtitle discloses apparently. Urban Naxals: The Making of Buddha in a Traffic Jam tries to bring to the fore the modus operandi of so-called Urban Naxals, the writer describes them as intellectual mafia, intellectual terrorists or those who cover for the bloody war on the ground, sitting in their elite chambers, teaching and politicising issues in the classrooms, brainwashing young minds and protesting against the policies that can actually change the lives of the poor people, the idea for which these Maoists and Naxalites fight for, with and without arms.

Coming to the technical aspects of the book, the first part or rather the first half of the book has a very slow pace and readers might get bored, distracted or just feel dragged because of the prolonged sufferings of the author, personal opinions and conjecture about various issues. However, in the latter half of the book, there are too many things, first-hand experiences by the author and many things that might be classified as explosive materials against the elite ‘revolutionaries’ of the country, the white-collar Naxals who can be anywhere around you – the classroom, the office, the government institutions, the CEOS, the ministers, and virtually anybody!

The book elaborates and brings to the fore the major episodes that attracted the attention of the nation in the first tenure of the current PM of India, Narendra Modi. On the issue of intolerance and FoE, the author has summarised the case wonderfully and you can stand with this instead of reading everything because most of the details we already know.

“People with ‘If you aren’t anti-State, you are an enemy’ kind of attitude must not give us sermons on FoE. (sic) FoE is part of an Indian’s native intelligence.”

The book is divided into four parts and it has 49 chapters and many pages. More than what could have close the case for the author. However, we cannot complain because the author is not an author and a screenwriter. And yet, Vivek Agnihotri has been very successful in highlighting some of the most important aspects of the Red Revolution, student politics, media and the movie industry in India. Readers might find these things shocking, nothing new or just the usual as per their political and general life ideologies. However, for all those who are concerned with the country and its affairs, most of the things in the book should come as alarming realities that one needs to accept, realise and fight.

“It’s been established beyond doubt that some members of academia have been helping Naxals in attaining their objective of toppling the democratic system of India with an armed revolution. Exactly like the film. ”

Urban Naxals, as a book, has been a revolution among readers which tries to counter the intellectual side of this headless revolution wandering without eyes, common sense and listening to the claps of those sitting in their chairs, perfectly and authoritatively. Vivek Agnihotri might not be a perfect author when it comes to writing a book but his book is of importance and that’s why readers have responded to it enthusiastically. However, there have been counters to the book as well and these counters come from certain media houses and certain intellectuals who always counter things coming from a certain side…

To me, personally, the book has been revealing and very disturbing. If you want to know about the seamy side of intellect and its abuses, you need to read this book with patience. If you are in a hurry, you can begin with the third part and enjoy the hard-hitting revelations by the author.

Urban Naxals: The Making of Buddha in a Traffic Jam by Vivek Agnihotri – Review

Urban Naxals: The Making of Buddha in a Traffic Jam by Vivek Agnihotri is a political and ideological exposé that will shock you beyond surmises…