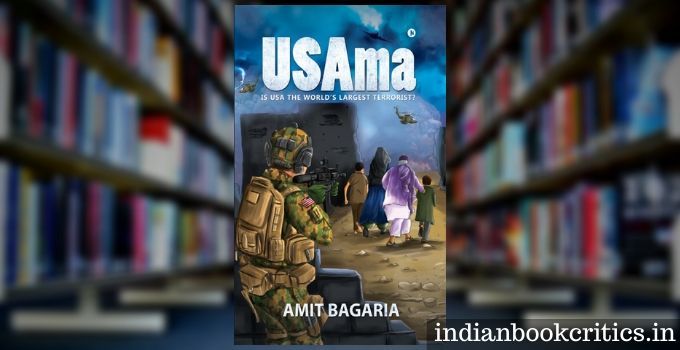 USAma: Is USA the World’s Largest Terrorist? Well, the pun in the title of the book by Amit Bagaria is qualified by the subtitle that he has decided to add to his book. The question that we need to ask is that is the USA really a terrorist nation? When we say a nation that supports terrorism, our eyes automatically shift to the location just neighbouring India – Pakistan. However, the author in this book claims that the USA is terrorist, and not even ‘just a terrorist’ but the world’s largest terrorist. Do you think the author may be right?

Amit Bagaria, well-known for his writings in the non-fiction genre and in the field of war, terrorism, intelligence and external and internal politics, almost whitewashes the sins of Osama Bin Laden’s masterminded terrorist attack on the world trade centre that killed almost 3000 people and tells the readers that America has been involved in millions of murders worldwide. Well, being honest, I don’t understand what conspired to make the author believe that world trade centre was trivial but yes, he offers evidence (not verified) and facts that make the readers, certainly, think:

The “War on Terror” means that Washington reserves the right to wage war worldwide and forever, against whoever the White House ‘defines as a terrorist’.

Is it true? Yes! Is it right to do so? No! However, this is the truth and this has been happening since very long and the world cannot do anything about it because every nation fears the mightiest power on the earth – the USA.

The book by Amit Bagaria, USAma: Is USA the World’s Largest Terrorist, is undoubtedly well-researched and also backed-up with unacknowledged factual evidence. However, the claims made in the book cannot be justified and at the same time cannot be disapproved. Terror is a global problem and it has to be dealt with strict measures. The USA takes one step further and does not wait for the world’s approval, maybe as Israel does. Israel is on constant conflict with Gaza and it has also killed many, if not like the USA, not far lesser than that. So, shall we call Israel a terrorist nation? We will have to think about it. Amit Bagaria tells his readers that the USA supplies arms and weapons to the leading and smaller countries in the world – true. That the USA is a country that fuels warfare – true. That the USA is playing fire and petrol at the same time – true. However, terrorism is something that Pakistan, Taliban and ISIS do – not what the USA is doing – to many people and to me as well. So, I won’t agree that these reasons can be applied to label a country like the USA with the term terrorist (that also world’s largest) unless the USA indulges in religious warfare – the fundamental genesis of the terrorists.

Who should read this book?

If you are interested in knowing about the USA and its covert and explicit operations that were used to destabilise various nations and influence their reasoning and thinking and policies, you have to read the book by Amit Bagaria. He provides an important analysis of the USA’s strategies that were and still are used by them.

Where can you get this book?

You can get this book in various forms on Amazon India. Here is the link: