Without God: Science, Belief, Morality, and the Meaning of Life – Review 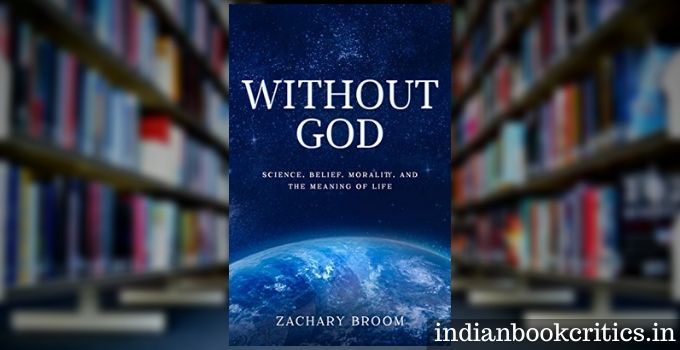 The biggest question that we face as children, teenagers and grown-ups is undoubtedly the question that questions the very existence of God. Is there any God? Where is he? Where is she (for the feminists who would lambast me)? Did anyone see God? Did anyone see miracles? Many questions like these a few are there, thrown like darts on the same board every day, to be answered but we don’t have any concrete idea. Why am I telling all this to the readers of Indian Book Critics? I have recently read a book by Zachary Broom – Without God: Science, Belief, Morality, and the Meaning of Life.

There are twelve chapters in the book. Each of these chapters presents different scenarios to the readers and argues in favour and against the existence of God in the context of the given scenario. The chapters like ‘The Evolution of Morality,’ ‘Right and Wrong,’ ‘Religion and Science,’ and a few others like these are balanced and wonderful to read. The author, Zachary Broom, seems to be defending God’s party and he has done that wonderfully. However, his views are limited to Christian theology.

The author hasn’t been a poor chap anywhere in the content. He has written beautifully and equally beautifully he has given space to all the arguments and counterarguments in his narrative. There are many pages at the end that will guide you through all the citations that Zachary has used. His research has been profound and deep. He has brought the heavyweights to attack God’s idea and even heavier ones to defend God’s existence. So, you are going to have fun, a lot to learn and enjoy the content you read.

Is the author biased?

Yes, at times, the author has taken God’s side in the book he wrote. Is that wrong? I strongly support the active reading philosophy when any author is writing a non-fiction book on a subject that demands one’s opinions or one’s actively taking a side. Presenting the counterviews is a good idea but at least the readers should be aware where does the author stand! Zachary has done the same and he has done it emphatically – with strong arguments.

Limitations of the Book Without God: Science, Belief, Morality, and the Meaning of Life:

Yes, there are certain limitations that a careful reader can observe in the book. The book does not let you know views outside the Christian periphery. The author has damn right to write what he wants and represent the religion he wants to. However, in doing so, the author has certainly lost a big reader base – the believers in God in other religions. Moreover, the author also wipes out the belief of others in a God other than his single-handedly while he writes:

“A few chapters later, God wipes out all of humanity for their sin with a worldwide flood, only sparing Noah and his family.”

Zachary, while I respect your right to believe what you want to believe and defend and propagate your religion while defending theism for many of us, you cannot rubbish my belief in ‘my’ God by saying that there was a worldwide flood and only Noah and his family were spared. We are not the children of Noah here in India; we are the children of Manu. And by doing so, you give the nay-sayers an upper hand in their arguments against the existence of God.

Is the book good? Overall Conclusion:

While there are many good things in the book – you can learn about the naysayers’ philosophy that is strong and rational, you can also understand how the philosophers defend the design of God and you will find it interesting that without God’s idea, there is nothing to be surprised in the world! There are limitations in the book and not any book is perfect. But the book is worth your time and money! Get a copy from Amazon India and read it today! Link: