A Farewell to Arms by Ernest Hemingway – Review 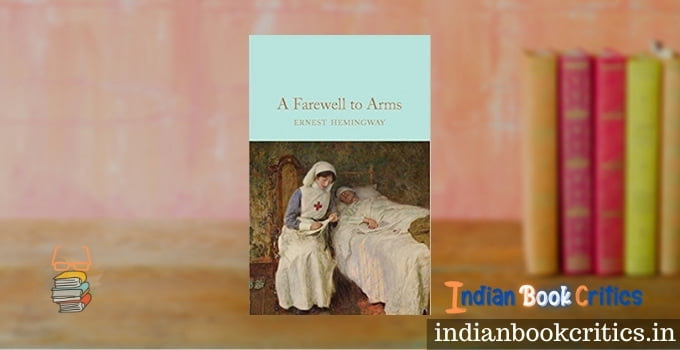 A Farewell to Arms, written by Ernest Hemingway and published in 1929, is an American novel of the ‘novel on the rise’ era in the USA. The novel depicts many things and also connotes many direct and indirect consequences of war in the context of human civilisation. However, the art of writing and the art of making the personal into a universal are something that will always be remembered whenever a reader begins reading this one by Hemingway. A Farewell to Arms may also be seen as the benchmark for the novelists of this age and that’s why we could see the works like Atonement.

A story of an American working for the Italian Army and Miss Catherine Barkley, a beautiful lady of English origin, who eventually falls in love with Frederick, the protagonist and the narrator of this novel, prove a very simple but effective point that not only two nations or many nations go in a war – it’s the world that goes into the flames of war and it can never be beneficial for anyone. An English and an American come together in a very difficult condition during the first world war but they are still able to find blissful moments of love amidst hues and cries, woes and wonders of war…

We can certainly feel the horrors of the war acting upon human conscience and marking its effect emphatically. No country can love to be at war – no country can accept the sufferings a full-fledged war brings to the citizens. The first world war was an adventure or a quest, malicious and notorious, for power and recognition. And the second one, even more horrendous, was a quest for supremacy and assuming the role of leadership. However, it is quite ironical to see and realise that an author as sensitive as Ernest Hemingway could not fathom the role of his own country and the government, as notorious as one of the 1940s and thereafter, in the second world war, the Nagasaki bombing and then a prolonged quest for power and more power… Hemingway had all the time to write about the first world war and even about the Spanish civil war but he just couldn’t bother to realise what the USA was doing. Isn’t it strange?

A Farewell to Arms is a thematic success, a success in a wonderful use of language even being in the first-person narrative, directly involving the protagonist as well. The novel will certainly take the readers into a tight grip and take them back into the world when world wars were being casually forced upon the world – just like that. Nevertheless, the horrors that T. S. Eliot realised and wrote about in his landmark publication, The Waste Land, was superior in cause and effects analysis than this one, even being a novel. Being a cynic, one can assume all kinds of roles that a novelist was given during the days of warfare that involved the USA. However, being a reader, one has to be kind of whatever Hemingway could do in this publication commenting about the horrors of war…

The novel will outdo many modern publications and that is for sure. The novel will also let the readers enjoy the luxuries of language and motifs, plot and a broad theme as well as the overall impression that a literary work of art can have. You can get a copy of this novel in various formats from Amazon India by clicking the link below:

A Farewell to Arms by Ernest Hemingway – Review

A sensible, meaningful, literary and wonderfully written piece of fiction…