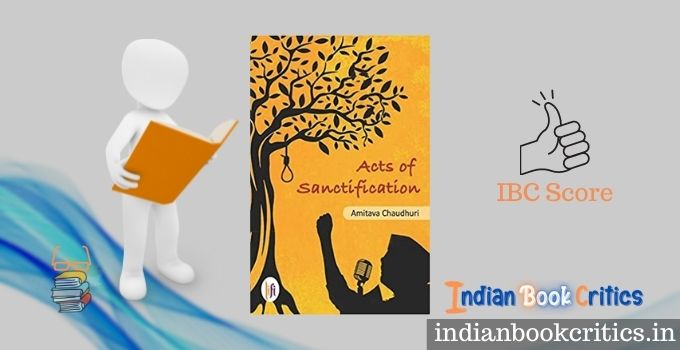 The novel ‘Acts of Sanctification’ by Amitava Chaudhuri is a wonderful political fiction loaded with aspiration, conspiracies, duel with the past of oneself and hopes and despair about the future to come. It is indeed a different kind of theme that the author has tried to explore and we seldom see modern novelists working on such diverse, layered and realistic ideas.

Acts of Sanctification begins with the campus where two lovers fall out of love because of misunderstanding on the part of both. Rohit has been pictured as a too casual, modern lover for whom making love to a girl does not mean marrying her. Saanjh, on the other hand, takes pride in values and cannot accept the ‘heat of the moment’ argument meekly extended by the man she ‘supposedly’ loves.

And so happens that this guy Rohit, son of a respected and reputed police officer in Delhi, graduates with an engineering degree and decides to spend his usual life – a job, a marriage and the usual affairs of every day. However, fate and the novelist have different things in mind for their ‘hero’. Rohit becomes a sensation among people in his locality when he slaps a heavyweight politician and instantly gets refuge in the opposition party because of his ‘roadside heroism’. Muraliji is a powerful politician because he has been winning elections for more than 5 consecutive terms. Rohit, a young man, can barely stand against him on papers. However, his ideas, his appeal among youths and his strategic planning for the elections approaching fast get Muraliji on the backfoot.

Will he win the election? Will his family support him? What will happen when Rohit is made to face his past? What may happen when Saanjh comes back to haunt Rohit for his naive behaviour in the past… during the college affair. The novel has all the interesting twists to offer and, perhaps, a heart-touching ending that will invoke mixed feelings among the readers.

The novel is interesting and intriguing and it allows the readers to finish it in one or two sitting because the novel unfolds many events one by one. It does not let the readers’ curiosity rest for much longer and one is forced to reach the last page. It shows how cruel can politics become and you need to have thick skin in order to survive in politics. Every argument will be twisted here and you have to defend it well to survive. Even a little mistake in your life can haunt you after so many years if you decide to enter the political arena. And this idea has been explained by the novelist Amitava Chaudhuri in a very visually appealing manner. It becomes very hard to maintain a healthy relationship between personal and political life at the beginning of Rohit’s political career and it leads the readers to believe what they see every day on TV is not all the reality that they need to know. Politics is not as convenient as TV anchors make it look.

Amitava also seems to suggest that the classical proverb ‘All that glitters is not gold’ perfectly fits in politics. The so-called ‘Satya Party’ in the novel signifies all those parties who enter politics to clean it but ultimately become the same old fashioned typical politicians’ dominated political party – ready to do anything for power. Realistically, this is the truth about politics… power has to be achieved. The protagonist Rohit tries to maintain a good image of himself but he has no idea that he is alone in the tempest. He faces hard and bitter truths of politics that he has never imagined.

The novelist has been at the top of his writing almost all the time in the course of these Acts of Sanctification. The novel has a perfect human ending rather than any superficial ending that we often see in contemporary novels. For readers who love to read realistic, well-written and impactful fiction, this novel will be a good one. You can get a copy of the paperback edition of this novel by Amitava Chaudhuri from Amazon India by clicking the link below:

Buy the novel – click here to get a copy

Acts of Sanctification by Amitava Chaudhuri is a novel that will excite the readers for its political twists and also sober them with a humane, emotional and fate-inspired ending…