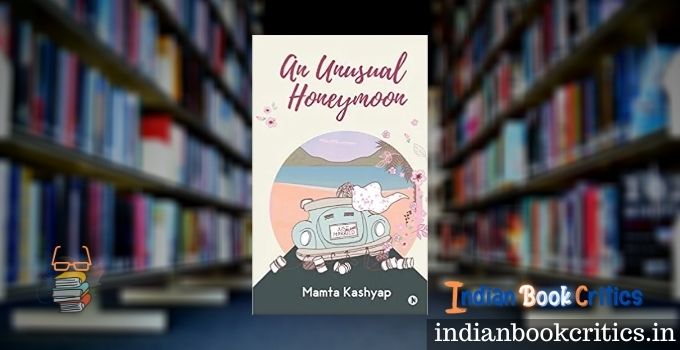 All this begins with an idea. An idea to make others realise that she is more than just a person who ‘should be’ broken after her boyfriend (since long) leaves her, after certain epiphany, right before the marriage. Mahashweta (you heard it right) is the protagonist around whom the entire story revolves in this novel – An Unusual Honeymoon. Though she wants herself to be called Shweta only, she does have some important, innovative and passionate ideas about The Cowboy Inn in Sikkim; she wants to own it at ‘any cost’ and it certainly costs it dearly.

An Unusual Honeymoon begins with a single woman arriving for her honeymoon. She instantly attracts the attention of people around her because of the fact that she has arrived alone for a honeymoon; her name comes as the first ring of the alert alarm and a single honeymoon plays the next part. Mahashweta’s honeymoon (alone) becomes more interesting for the readers as she reaches to the owner’s office the very next morning with a proposal to own it – buy it or just have the ‘admin’ rights with assured ‘profits’ for both the parties. Rahul, the manager as well as the owner of The Cowboy Inn, has different plans and he proposes marriage to Mahaswheta! Yes, you heard it as it is – a proposal of marriage to a woman who has arrived alone on her honeymoon! Can you imagine the scenario?

Mamta’s novel is super fun, exciting, unstopping and certainly a must-read because it offers healthy entertainment, amusing read, and also a new perspective in Indian English fiction, a woman at the centre narrative with emphasis on her identity, active-actions, and being a non-subordinate character, throughout the novel. The second part of the sentence above is for those who want to get ideas about the current state of Indian English fiction and its themes, motifs, and writing style. The first part is important for everyone; An Unusual Honeymoon is a very relaxing read as it begins with a troublesome scenario in front of the readers but ends positively (how, why and when can be answered only if you read the novel).

I would like to draw the attention of the readers on certain technical aspects of the work. It does not have any special plot that would need too much from the readers. It is just a work that you read, understand, enjoy. Written in a simple and flawless language (because you can decode whatever you read instantly), the novel by Mamta Kashyap does not have any super-narrative, underlying themes or subconscious elements. Everything happens in a way that you can imagine (rather easily) happening with anyone, mostly in movies though. It offers a Bollywood script in a literary format and also, to be frank, better than Bollywood could do it on screen!

On the critical side, I would like to highlight that the author might have overdone the part that deals with monologues by the protagonist. Mahashweta, who is also the narrator of the novel, speaks too much to herself. It could have been presented in a general narrative or the novel could rather have been narrated by some unknown person telling a tale from the past – as it usually happens, traditionally. Every other thing, mostly, scores well and I am sure readers who are up for a light comedy will certainly like the work. Available in the digital and traditional formats on Amazon and other sites, you can buy the book and enjoy it. It should take a few hours for a casual reader.