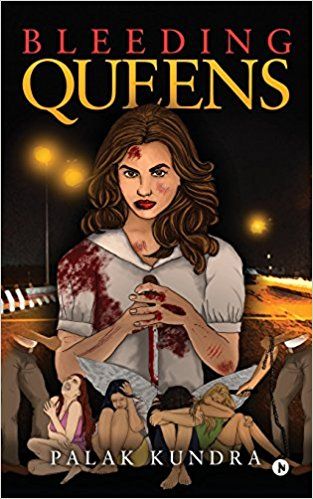 What can a woman do? In popular culture, she can marry a good guy; have kids; manage the household; and then peacefully die. In the rarest of the rare cases, she can go outside and work shoulder to shoulder with men. (Though we must admit that this situation is changing. Women are getting out eventually and working with men and even getting ahead of them in most of the cases. This is a good sign indeed!). Nevertheless, a woman in a fiction can do many things which will surely make the readers wonder in awe! One such woman named Diljit has made her debut in a book titled Bleeding Queens by Palak Kundra. She does not only achieve her dream of being an actress but also teaches the lesson of ‘life’ to the devils who have done the most heinous crime with her. Today, I will review the book Bleeding Queens for the readers.

The story is set in Delhi and the family which features in this novel is of Punjabi origin. Written in Hindi, the language used in the novel will offer the Punjabi touch to the readers at times. To the surprise of the readers, the novel starts with something which we cannot imagine even watching in the movies which offer greatest of the suspense to the audience. It starts with a murder in which a woman is involved and I won’t elaborate the scenario and context of the murder or it would kill that reading pleasure.

The plot of the novel is rather simple yet bold enough to keep the readers intrigued. A girl named Diljit sees her ideal in Deepika Padukone, the leading Bollywood actress. Diljit, who is rather brave and straightforward, wants to be an actress like her. She has a loving and caring family which supports her causes and ambitions. She secretly loves a guy named Rohit. Her brother Karanveer is also an important character as he plays a vital role in the novel as it progresses.

The breaking point in the plot of the novel is a brutal crime with Diljit. She is gang raped by cruel animal-like human beings who also wound her mother and kill her father. She has almost broken but her brother and her boyfriend Rohit support her and make her stand once again. And then, what happens further in the novel is something that readers will not only enjoy reading but also appreciate the author for giving such a courageous twist to the novel.

Palak Kundra, the author of Bleeding Queens, has certainly made her novel different and has given it something which most of the authors could not do. She has not only given the lead to a woman character but also a concept of a true woman-centric narrative which is truly driven home by a woman only! This is something which the readers will surely enjoy reading. The way Diljit plans and executes her revenge and the way she leaves a message for the women out there are truly fantastic to be read.

My only suggestion to the readers is that get the copy of this novel as soon as possible and finish it. And don’t forget to leave a comment or advice for Palak on her Goodreads page because she has truly done a tremendous job with her very debut work!

You can buy the novel from the Amazon link below. Kindle and Paperback links are given:

A MUST READ novel by Palak Kundra! Grab your copy now!