Despite Stolen Dreams by Anita Krishan 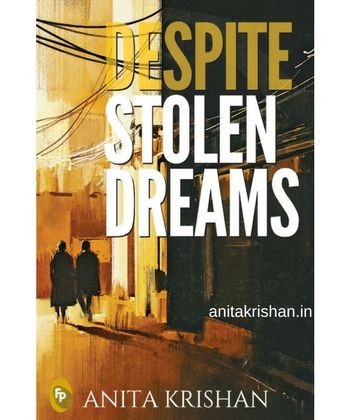 Wali Khan is a person who has seen the terror from the ringside and once he couldn’t bear more of it, with his family, he has to run away from the land of Kashmir to find a shelter in the busy city called Delhi where he sees the world from an altogether different angle and his bitter-sweet experiences in Delhi become the soul of Anita Krishan’s latest novel Despite Stolen Dreams. And other than that, the parallel story which sketches the eventual and inevitable humane transformation in Shakeel because of his true love for Shabnam is also interesting as well as offering some serious literary pleasure to the readers. Anita Krishan’s attempt at exploring the theme of terrorism in the valley and by that exploring the chaotic human psyche, which is often prone to love, is just amazing and a single phrase review of the book Despite Stolen Dreams would say only one thing – MUST READ! 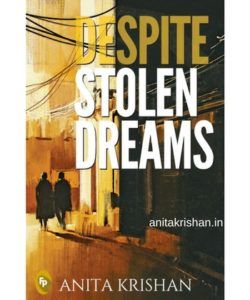 The Plot:
The plot of the novel is nothing like the usual ones you read today in the name of contemporary fiction; this is far better constructed and this is far better to read. Anita highlights the problems a Kashmiri might have to face when he leaves his homeland and comes to stay away in a metro city like Delhi. However, the introduction of a Sikh elderly person Kashmira Singh gives another dimension to the plot and the duo or Wali and Kashmira explore their lives together – spreading love and joy all-round and changing the lives of many – Kapoor, Rao, Rosemary and others… and there is also the subplot of terrorism which keeps coming back in the narrative – Hashim and Shakeel are two entirely different people performing their ‘duties’ as terrorists. One is brutal and savage and another is rather a round character as E M Forster has put in his Aspects of the Novel. In short, the plot front of the novel will let you be delighted with the twists and turns – can a Kashmiri man every marry his daughter to a Hindu boy? Read the novel and you will see the dilemma yourself…

The Themes:
Those who follow Indian English Literature ardently must be knowing the author Anita Krishan is. She has previously explored the theme of terrorism in her novels as well. However, Despite Stolen Dreams is something different and something rather constructive. Terrorism as a theme is certainly in the novel but that is somehow outshined by the theme of love. A ‘sangam’ of different parts of India can easily be seen in Delhi’s society where Wali’s son Salim rents an apartment – Sikh, Muslim, Hindus of different sections and Christian too… and there you feel that terrorism and terrorists, howsoever momentarily powerful they are, can never defeat the spirit of humanism! And you will just love the way the novel ends… purely humane and purely a realistic fiction! Thus, on the theme front too, Despite Stolen Dreams steals the show.

Narrative and Diction:
Anita must have been inspired by the classics she might have read and some mark of those readings can be spotted.

“The icy winds of the Krannu Mountain knifed through him, penetrating through all the layers of clothing like worms happily munching their way through a fruit. The cold crept down his stiffened neck. He shivered violently and wished for the warmth of a cosy house with fire burning in the hearth.”

The narrative of the novel is designed in such a way that it does never let the readers relax and keeps pushing them to read further. Language is rich and readers won’t have anything to complain about the leisurely language which most of the authors use these days. For the readers who are rather new to fiction reading, Despite Stolen Dreams will not only be interesting but also a game-changer and it will certainly teach them what they were missing all these days…

Readers, if you are looking for a book which will offer you something called literature, this is your chance! Strike a reading chord this weekend and go for Anita Krishan’s another fine literary fiction Despite Stolen Dreams – the book strikes out the seeds of terrorism and also gives you an insider view into the menace. It will thrill you and also satisfy you with hopes that we always have against all the evils and her novel ensures us that there is hope and there is an end to the problem of terrorism. A fine blend of love and terror contrasted… a must-read novel for all! Get your copy from Amazon link below:

A must read novel by all means… you will get to see the menace contrasted with joy… read it now!