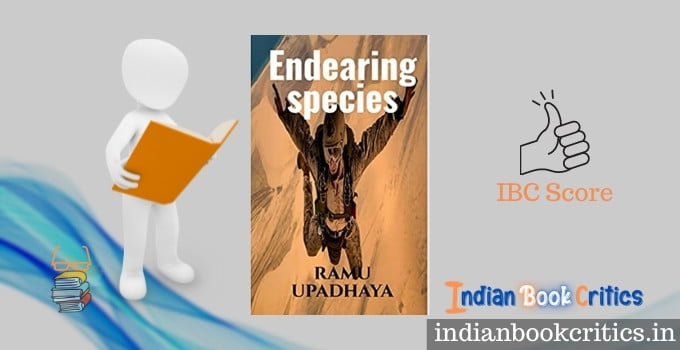 The first thing that instantly grabbed my attention about Endearing Species is the way the novelist has named the characters, the leading ones, in this novel. Though the author tries to convince his readers that the book is about the bravery and servitude of the Gorkhas for the nation, the novel takes many different turns and takes the readers on a grand tour to different destinations that play the role of many different openings to many different dimensions of human existence forcefully attached to the story that runs throughout the novel. And if I may say it this way. the novel reads more like a documentary on the lives of Gorakhas and their past, present and supposed future. And one would agree that the novel sounds more like a non-fiction narrative that continues in small fragments giving the readers something to chew, something to digest, something to spread further.

It is also to be noted that the writer of this novel, Ramu Upadhaya, has tried to convey all the essential information in his prologue, the note of thanks and even in his writing without any prejudice, malice or even bias of any kind. He has tried to put forth not only his vision but also imagination… the two cemented together in a way that one can apparently witness the cement as soon as one starts reading it. Endearing Species is a mixture of fiction and non-fiction, fact and fancy, academically established truths and imaginatively conceived non-truths. The good thing that the author has done in this book is that he did not try to bull dodge the readers with too much at once. He has given them the space that they will endear.

The fragments that describe various emotions, actions, thoughts, qualities or specific things about Gorakhas are designed in a random manner and there should be no coherence seen or felt by the readers among these fragments or sections or paragraphs. However, whatever you see makes perfect sense in isolation and this is the beauty of this book. You can pick it up and start reading any page, any section and anytime, you will get something.

There are romantic scenes, scenes of camaraderie, day to day lives and petty things, strifes of the common 9-5 life, aspirations, inspirations and Gorakhas and Gorkhas’ all the way… The author has tried his best to bring the known, little known, totally unknown things about Gorakhas to the world. This novel portrays the lives of two Gorakhas in general who represent the entire tribe… and their presence, co-existence with others, national and international perspectives (not in any sequence).

With two characters, Maila and Thula, Ramu Upadhaya, the author has weaved an entire story… not in an order that stories generally follow. And still, for those who have the patience to go through this novel and enjoy the painstaking process, there will be too much to enjoy. Language is not that moderate. Albeit a little elevated than the usual discourse we find in contemporary fiction by Indian authors, Ramu Upadhaya has used language to the advantage of his narrative. Vivid imagery comes into the novel as well but not too frequently and contemporary readers will like this much depth in fiction. Is it a read for all? No! This is a book that is intended to be read by serious readers who can understand the joy of reading serious fiction with purpose, reason and emotion tightly contained inside one box.