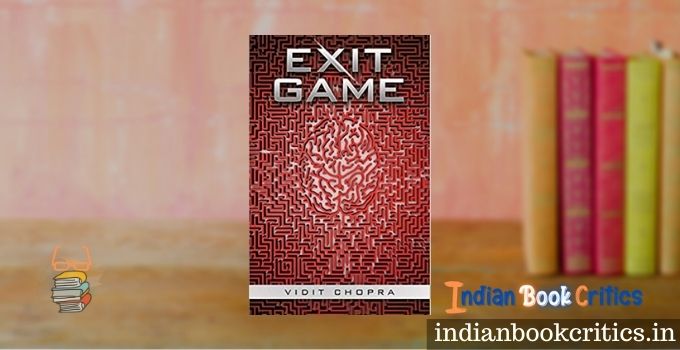 Let me say it at the outset that Exit Game is a futuristic science fiction novel that demands a little awareness of the technology we might see in the future. If you have seen movies like Tron Legacy, The Matrix, Avatar and so on… you will surely enjoy the novel as you can visualise all the scenes that are being described by the novelist, Vidit Chopra. After putting this at the very beginning, let us get into a little depth and bring forth some details that might arouse the interest of the target audience in this novel. So, let’s get the book review started!

The story gets its impetus from a character named Genie. Genie is an unidentified character who is living in his avatar. He is responsible for the development of games at Captivate Tech. He is a genius who has brought a revolution in the field of gaming… and do remember that we are talking about a futuristic world. And, as usually happens, gaming addiction of the users, gamers and general audience bring the company money and the technical genius is dissuaded by an urge to become more and more powerful – become almost a God who can control what happens with whom. This is the general idea that drives the story to a conclusion which is rather mysterious and you will enjoy that as well. Melissa is a companion of Genie and she is also on a responsible position in Captivate Tech. Ahmed, a former employee of Captivate Tech (written as CT), has formed an alliance of the likeminded people to analyse the progress of mischievous Genie – The Anonymous Collective. There are many agents but the one in the limelight and an important character in the novel is Sharon, a blogger on technology and especially on Captivate Tech’s impacts on the society. In a nutshell, this is the story of Genie vs The Anonymous Collective!

The perpetual struggle between the evil and the righteous! This is what is at the core of this novel (and perhaps many others). Vidit Chopra has tried his best to protract this struggle into a wonderful novel and he has also presented a wonderful case for the futuristic science fiction in Indian English literature. There is a weird flow in the novel that keeps the readers hooked to the narrative. Game, human beings playing the game with their avatars, addiction, super science, power-hungry tech-giant and so on… The novel offers the world that we might see (we pray not to see it, though). The theme has been employed beautifully.

The Plot and the Narrative:

Vidit has used simple language. However, he could have made the novel a little first-time reader-friendly by using a little less techy language. Though it will be a wonderful experience for the readers who are into reading sci-fi novels regularly. The plot reveals itself gradually and it keeps the readers intact. However, one might also notice (if the reader is critical enough) that there are occasional extrapolations of the events and discourses that might annoy the critical and serious readers who, whimsically, read the book to find faults. 😉 And this issue, seemingly, might have elongated the novel a little more than what could be the ideal length. Otherwise, for the casual and regular readers, the novel offers a plain and straightforward narrative in third-person and a tightened plot that keeps the readers engaged till the end – the finale that happens between Genie and Ahmed when Genie tries to fuse his code into the DNA of Ahmed.

Though there are critical points that emerge in the novel, the novel will suffice the leisurely readers and sci-fi readers. It will offer the reading community some new perspectives in science and technology that are very new to the Indian readers. Vidit Chopra’s contribution to the science fiction literature in India is apparent, after reading this novel I can say that, and it should inspire the writers, established as well as emerging ones, to write something in the same direction. Vidit’s work is recommended to science fiction readers. It is also recommended to the readers who want to read something new and different than what they have been reading erstwhile. So, you can get a copy of the novel right now from Amazon India and enjoy reading it right away!

Get a copy of the novel from here – Amazon India

The novel offers newness in the science fiction genre to the readers in India. It introduces the much-awaited life-in-the-game theme and wonderfully caters to the enjoyment of the readers.