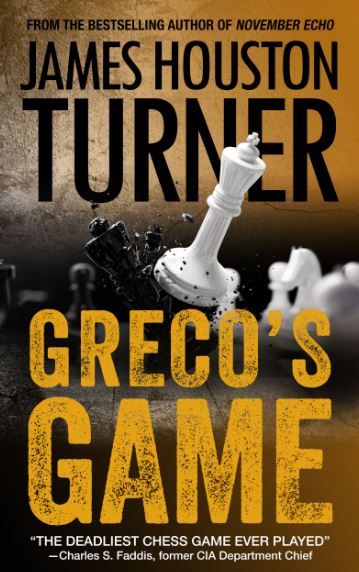 “Meet Talanov – the middle-aged retired KGB agent: He fights – he loves – he saves – he kills – he thrives and he keeps moving and there you go!”

Greco’s Game: An Aleksandr Talanov Thriller is one of the bestselling novels by the popular thriller novelist James Houston Turner and it has recently been launched in India too. I got the opportunity to review the book and luckily so because once I began reading the book, there was nothing stopping me until I finished it on my speed and enjoyed just every bit of this classic-cum-modernist spy thriller which, in textual-visual appeal (for me), has left every other spy thriller behind. Note that I am a huge fan of the legendary tales which glorify spies and I found this character Talanov nothing lesser than that of James Bond or even Holmes! He fights; he loves; he saves; he kills; he thrives and he keeps moving and there you go!

Greco’s Game: An Aleksandr Talanov Thriller begins with Talanov in a fix after the murder of his wife and his vehemently looking for the killer of her. He meets Larisa (who is a girl himself trapped in a human trafficking scandal) and that meeting is typical thriller novel stuff with the fights, almost death experience and all those cop-chase and luxury car stuff which you will surely like reading!

“Daz picked up a chair and threw it. Talanov grabbed one of the café tables and used it to deflect the chair. Daz hurled another chair, then another, but Talanov used the lightweight table like a shield and sent each of them tumbling to the floor.”

And these scenes are created with such an artistry that you can actually visualise these as if you are just watching it (and maybe very soon you can watch it too because James Houston Turner might land a movie deal very soon).

Politics, CIA, KGB, assassins, bloodlines, love, risk, game, past, doubts, fear… everything moves almost together in this thriller fiction and you will certainly like the way Turner has narrated the story. He does never let you feel loose and the grip of the thrill is always tight on the readers. Talanov is such an animated character that he keeps doing things and sometimes such outstanding that you will be awe-struck. He saves Larisa out of nowhere when she is almost raped by two street-criminals Slam-D and Dog. And what he does after beating them off is something you would seldom find in a hero who is ruthless otherwise:

Amidst all these scenes and storming pace of the plot which keeps the readers tucked to the novel, enter many characters one by one and the plot gets widened eventually. Talanov has not only to find who killed his wife but also to defend Larisa now (interestingly, the hooker who has drugged her and got her almost killed).

The inclusion of Larisa becomes important to the novel because she represents a different part of the narrative – the issue of social evils who are still out there looking for their preys and trapping them and using their helplessness to their advantage and one such person is there in the novel in form of Borzakov (who is the main villain in the novel).

Are you ready for the thrilling ride with our hero Talanov? You will absolutely love this novel as it has already been loved and praised by the readers abroad. It’s your turn now – readers in India! Get ready and get your Kindle edition of the novel Greco’s Game: An Aleksandr Talanov Thriller today from Amazon India website. The link is added below:

by – Ravi for IBC

A must read book for all those who love spy thriller novels! Turner has something for you – something special!