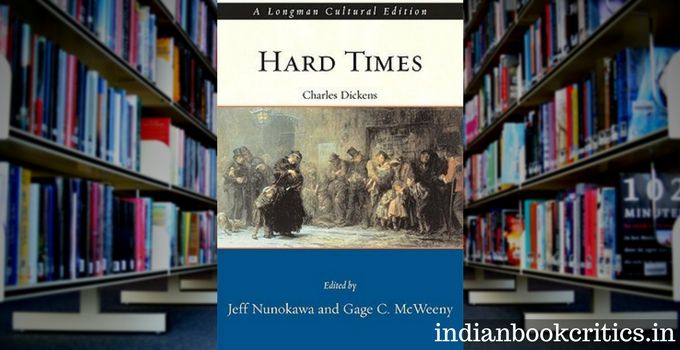 Charles Dickens, even after his death and so many years gone, still continues to be one of the best-selling novelists partly because of the inclusion of his books in the curriculum and largely because of his art of creating the world-class fiction which sported every element in the best possible proportion to ensure that the novels appealed to the readers of every class and creed. Hard Times, one of the best-known novels of the Victorian Age as well as all times, is the tenth novel written by Charles Dickens and it was first published in instalments in the magazine Household Words and later in the same year, 1854, it was published in a book form. There are multi-merits in the novel and to count them one by one would be a daunting task which I would certainly not like to undertake. However, I do have a few opinions to extend on this novel that I would be sharing here.

Sissy Jupe: It would certainly be correct if I say that Sissy Jupe is the solace part of the novel. She does not give in to the ‘facts and figures’ and she rather lives with her truth and emotions which help not only her but the other characters of the novel as well. She is the one who helps in standing a poor lady Louisa after her tragic fall-out. I love this novel by Dickens largely because of this character called Sissy.

More than that, Hard Times is a novel which contrasts the life with life. On one side, there are Gradgrind and Bounderby who are ready to crush anything whatsoever under their nose which smells nothing less than facts and on the other side are the characters who are there to live the life with peace, love, harmony and organisation which keep them going. They are far more realistic than the ones who are with facts and figures.

The worries of Charles Dickens for the increasing capitalism and the lust for more wealth are apparent in the novel. Hard Times is about the hard times we have in our lives and to save ourselves, sometimes, unconsciously, the characters like Stephen Blackpool are put on the altar and that’s pathetic, sad and brutal! Dickens calls it out loud and he does not hesitate to mention his ideology in an implicit manner.

Hard Times, as it stands today, is certainly a masterpiece and would remain the same. It has a plot which keeps the readers engaged because Dickens has selected the sequence of events in a very clever manner. He has made the characters laugh and loose just perfectly enough so that they appeal to the readers the most. And the theme – that’s just outstanding, wide and deep! The master novelist of the Victorian Era looks at the issues prevalent in the society at that time as well as (he knew it very well) timeless. Even today, we are very much able to make our children educated but we can seldom make them learned.

That’s a must-read piece of fiction and you MUST read it. You can get a copy of the novel from Amazon store right now: