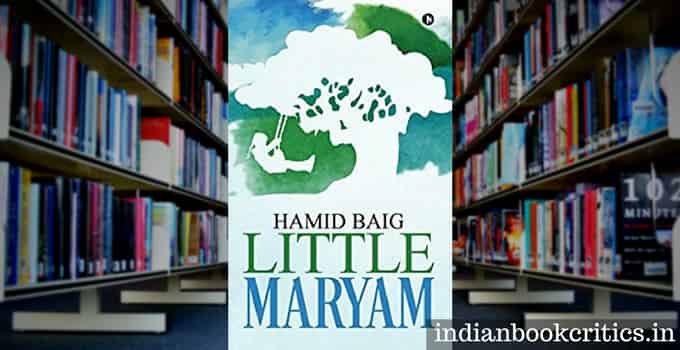 Little Maryam is the debut novel by an author who looks quite promising and creatively crafty, Hamid Baig. The novel has been released on the republic day this year, 26th January 2018. Since the release, it has been in the buzz constantly and many readers have enjoyed this romantic novel which has many other dimensions in the story other than the romance. Little Maryam is a novel which has been written with a very clever design and it forces the reader to keep reading until the author announces ‘the end’! As a reader, I have felt that there is an urge which had me reading the novel quickly and it also kept my interest captured. Thus, on the narrative front, the novel does not have any drawbacks whatsoever!

The central characters in the novel are Maryam and Dr Saadiq Haider and the novel is about their love which sprung naturally and truthfully but the lovers were forced to separate from each other by circumstances. Maryam’s father, Colonel in the Indian army, had his daughter married to someone else because the intelligent and ambitious young boy Saadiq had to go to jail in an unintentional murder case of his friend Ritesh. When out of jail, Saadiq loses his motivation but somehow manages himself and reaches Mumbai – leaving the greenery behind. And from Mumbai, he somehow manages to impress people with his wonderful knowledge and skills and reaches Johns Hopkins School of Medicine, USA! He even goes on to become one of the most-known specialists in gene studies and also wins the Nobel Prize for his medical research… however, the renowned person Dr Saadiq Haider does miss something in his life – Maryam. And in a very interesting circumstance, he unites with Maryam again but only to explore many secrets that even he could not imagine. Will they live happily? Is Maryam’s husband even alive? Will Maryam remember her past? Will Saadiq’s lost love and ‘found again’ love be happy? The novel will answer all the questions that the readers might have and believe me, the novel is written in a way that you will just be reading it without caring for anything else. The roles of Anne Miller, Salman, Haji and others are rather short but very important. You will find the craft of Hamid’s writing while reading Little Maryam.

On the critical note, the plot of the novel is straight but intriguing and very interesting. It arrests the readers’ attention wonderfully and compels the readers to finish the reading. It does not offer those boring or lopsided loopholes which let the readers go off the hook. Language is very simple but quite amazing. In some instances, you will also realise that Hamid has used the metaphor of a tree, called Kali, (originally Kalpavriksh). Dehradun’s greenery and then the changing contours of the city are also evident as the novel progresses. In short, Little Maryam is a complete novel which lets the readers realise the power of true love and also the extent to which it can go. You should never miss the ending of this novel which is even intriguing and emotional and the role of the journalist turned into an author, Anne Miller is very important and it shows how well the debutant author Hamid Baig has done in his very first novel!

And at last, if you want to read a love story which is romantic and yet not cheap in content with textual pornography, Little Maryam is the book that you will love to read! Love is there; romance is there; circumstances are there; fate is there and also is there the big heart of the lover Saadiq which makes him do something that will always be remembered! A must-read novel by all the possible means and you should never miss this. Get your copy from the Amazon link below:

A must-read novel for the readers who love reading books with emotional excursion and romance… Saadiq will surely impress you and so will his beloved Maryam and so will the ending of the novel! Do read!