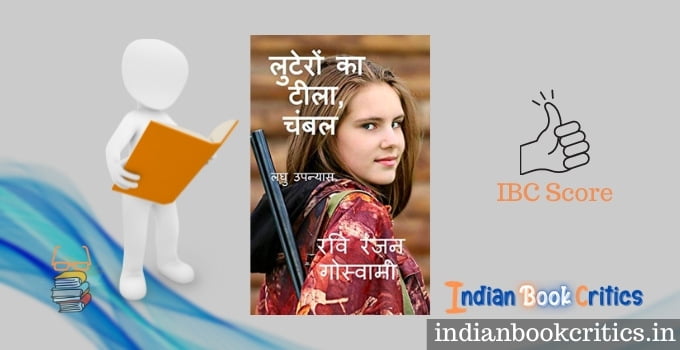 Lutero ka Tila: Chambal by Ravi Ranjan Goswami is a novella that throws light on the other side of Dacoits. By the other side, I do mean the other side that our esteemed reporters find out in the dreaded terrorists like Osama and Baghdadi. However, this other side and the general side that is visible to the world otherwise are nowhere near the contrasting ones that I have posed in the sentence above. Leave it.

Ravi Ranjan Goswami is a reputed novelist who has written many works of fiction. Many of his works have become bestsellers bringing fame and reputation to the author. Lutero ka Tila: Chambal, written in Hindi as well as translated in English, focuses on the dreaded robbers of the legendary Chambal Ghati or the valley of Chambal. Nevertheless, the novel by Ravi Ranjan Goswami has tried to bring the lesser-known sides of these dacoits. Emotional and unknown aspects of the lives of these robbers will have the same impact on the readers as we used to feel when met with popular villains on the big screen playing changed-heart roles in certain movies.

The story goes in an old-fashioned way – people are happy. They are going to meet their friends, families or to attend a marriage ceremony, and they are surrounded by the fearsome bandits of the Chambal valley… The usual things happen – don’t tell anyone; don’t report to the police; give us everything that you have; a few people are kidnapped as well. Little did the robbers know that a police officer was sitting in the same bus, and he somehow escaped from the clutches of the gunmen. The IPS officer who was posted in Gwalior, ran to the nearest police station he could find and returned with the police force to help the hostages escape.

However, at the site where hostages should have been kept, everything was barren and empty and the travelling police officer, as well as the local police station personnel, feared the worst. With a heavy heart, the travelling one returns to the destined village and he is greeted with a wonderful surprise. All those supposedly murdered and looted, are back home… how? Why? When?

The suddenness of the shift in the storyline might inspire the readers as well as baffle them. It is purely up to the readers’ perception of change of heart and sudden twists in life. I enjoyed it… though doubts are too natural if someone has. Kailash, the leader of the bandits, always wanted to leave these things behind and lead a normal life. He gets inspired after knowing about his grandfather who was a robber too but did fight against the British during the colonial era in India. The reception that he met during his last rites was amazing. Kailash’s father did want to return to the normal periphery of life but he could not muster the courage required to do it. Will Kailash be able to quit robbery? What will happen to the hostages? There are many questions that this novel answers.

This novel will surely allow the readers many moments of amazement and awe. The novelist has used the language that he usually uses. Authoritative writing in Hindi is very rare these days and Ravi Ranjan Goswami’s attempt will surely offer a few glimpses of that to the readers. Don’t let this opportunity run from you. DO read Lutero Ka Tila: Chambal by Ravi Ranjan Goswami and you will understand why I appreciated the novel this much.

Get a copy from Amazon India – click here to buy