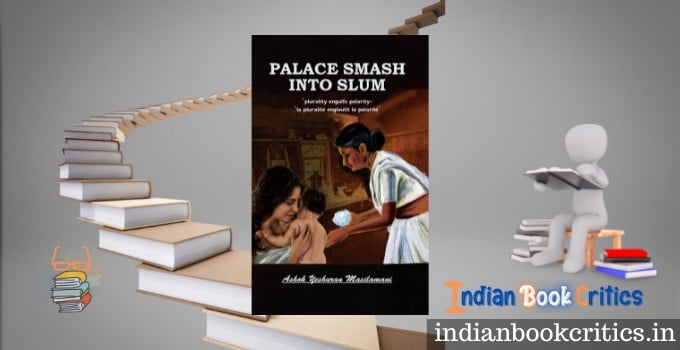 Indian English literature has witnessed a new trend. Many writers have started writing novellas. It is typically short in length, having the essential features of a novel. I have recently gone through such a novella titled ‘Palace Smash into Slum’ written by Ashok Yeshuran Masilamani. The author has tried to offer his readers something different from what we usually get to read in contemporary works. Ashok has kept the eternal strife between the good and the evil alive and he has been kind enough to let the truth have an important victory unlike many authors writing from the perspective of evil and making every possible fictional work a Money Heist propaganda. The title itself tells many stories as the Palace Smash into Slum… if you focus on the words and the play of the verb used.

The story is about the change of hearts. Self-centred, high-class, elite-mentality and usually up the arms against the poor people go through a cleansing. A Zameendar family in south India, enriched with Tamil traditions but loaded with monetary mentality. They have lived a royal life for a long period of time and the tradition goes on… still. The head of the family is Periya Zameen and he has an only son named Anbu Chezhian. Anbu is not interested in carrying his royal status of Zameendar. The guy wants a change for good (or bad) and he tries to align himself with modernity. Anbu runs many successful businesses and is happy with his life the way it is. Though his father, Periya Zameen, does not like his attitude about not believing in traditions and God. However, he cannot do much because Anbu is the only son of the family. Loved and cared for, Anbu can get anything that he wants and do anything that he likes. The turning point comes in Anbu’s life only after he gets married to Tamilselvi. Even after three years, Anbu and Tamilselvi are unable to become parents. Nobody knows what’s wrong and everyone in the family wants the best of the doctors to look at the situation but in vain. Fate changes, the baby is conceived, and yet again a problem occurs. However, the doctors warn that Tamilselvi can become pregnant only once and the situation may demand a choice – the child or the mother. What will happen? Can Tamilselvi live with her kid or does one of the two have to be sacrificed? How do the events that unfold affect the story? What provokes the change of heart that turns the palace into an open paradise for all? The story is written in a very interesting but traditional way. It will attract the readers as well as enlighten them about certain traditions of the Tamil population.

Ashok’s writing style is simply brilliant and the way he has narrated the story will keep the readers engaged till the last. He is a traditional author and that aptly gets reflected in his writing style. At the start, the readers may feel a little disconnected from the storyline because, it seems and later gets verified, the author begins with the present and gives the tour to past to his readers. After the introductions to the central characters, the story gets speed and readers will begin to love what they read. At the start, the readers may think that the central protagonist Anbu Chezhian is careless only thinks about his business and does not take care of his family. However, the perspective may change when you finish the novel. The classic employment of round characters in the novel may generate a cathartic response from the readers. And this is what all good works of literature aim at – communicating things to readers by the acts and reactions of the characters rather than preaching in between the acts and actions.

The author has wonderfully woven the story with a touch of realism and coupled it with fiction in a harmonious way. The story throws light on basic human qualities like honesty, love, affection, care, philanthropy, and many more. When Anbu’s wife was in need of medical treatment, Kripai Amma arranged to get the necessary done. She was a former medical staff and was honoured by the governor. Villagers also come to help Kripai Amma in her act of kindness and affection and also the basic human act. Despite all her credentials, she, Kripai Amma, always remains grounded and always eager to help anyone. These realities of life completely change the perspectives of Anbu. The author has successfully created a situation where readers will be able to get the message that a man can be wealthy but he needs to cultivate the real values in his life. He, Anbu, was the man who never folded his hands before god but when the time was not in his favour, he started to believe that there is something that is omnipresent and guides us in unknown paths. It was strange that a royal family’s child was born in a slum. And by this, the author also justifies the title of his work – palace getting smashed into the slum and a harmonious bond getting born out of it!

This is a wonderful novella by Ashok Yeshuran Masilamani. It is short in length but full of wisdom and thoughts. Nothing is extraordinary and everything comes from our real lives. We just need to identify things and embrace… this is the message that the novelist has tried to capture and circulate by creating events in the novel… and he has been successful to a great extent. Language is classy, simple and elegant without the author being too gaudy to flash his literary acumen. The novel will open many hidden corners inside the hearts of the readers! It is a great one after many days and it gets my best!

If you are interested in reading something wonderful, read this one!

Palace Smash into Slum by Ashok Yeshuran Masilamani is a social novel with emotionally charged dramatic inspirations taking shape, eventually but certainly! A good novel for those wandering readers who want to read real Indian English literature with motifs.