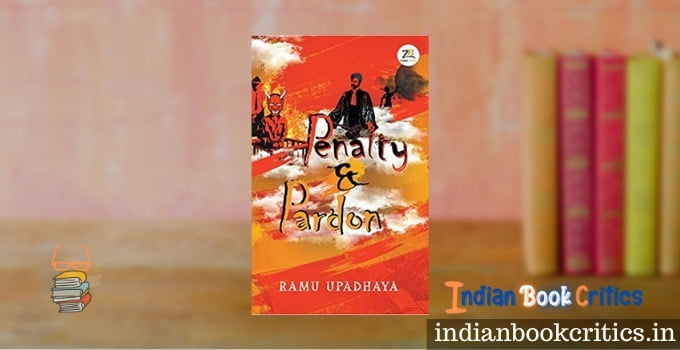 Penalty and Pardon is purely an imaginative fictional piece by Ramu Upadhya. The book is philosophical in nature and explores different dimensions of spirituality. Honestly speaking, you will seldom find these kinds of novels being read by casual or even regular readers in the contemporary age. While many young readers might dub Penalty and Pardon as a boring title, many with an eye for the different literature will find it impressive and enticing. The author has tried to do something different in the novel. The concepts that are grand – God, spirituality, belief in eternal forces, providence, and many others – have been expressed in various terms by the novelist.

There are major titles and there are subtitles after every paragraph within a chapter. The subtitles are rather cryptic, implicit and pointing in a certain direction. Patrick and Desmond have two different characteristics, two entirely different predicaments and two distant ideologies. The novel seems to further widen the differences between these two on a grand scale… in a grand scheme. The titles are also suggestive and anyone who has studied something or that about various religious beliefs and ideas might use these hints to set oneself in tune with the novel’s progress.

In all the fiction that I have read, characters do speak the mind of the author. However, in this novel, if one could say it a novel at all, the characters are subordinate and the author takes the driver seat – he is dictating the terms as the novel progresses and it seems overly loaded with heavily loaded philosophical ideas that make very little sense in isolation. The novel does not reflect a storyline most of the time and characters take the backseat more than often.

How Patrick was fooled? This might be the serious drive of the novel and it has been explained in many pages having lucratively written lines with tons of analogies, references, elevated monologues displaying ounces of wisdom.

To conclude my opinion about the novel, I will say that the author has tried to portray his understanding of life and life forces, spiritual beliefs and humane superiority (because of discoveries that we made and intellect that we gathered) and how things corrupt one’s supposedly unshaken belief in entities other than men. Language and narrative are not simple or straightforward. A reader will have to labour to understand or interpret the meanings hidden in the text according to his or her understanding.

Penalty and Pardon is full of arguments completed by the author and left to be completed by the readers as well. The novel is a piece of writing which cannot be decoded in a limited environment or by limited readers. Desmond is too crooked to be merely clever and he has dominated the scene out and out. Patrick is left with penury of faith and conundrum and he is tattered in front of the schemes by his counterparts. Well, the novel is a challenge to complete and I guess not many readers will be able to come across it once they begin. Are you the one who could complete it without wiping the sweat off your forehead? Come forth, reader! Grab a copy from Amazon India:

Penalty and Pardon by Ramu Upadhya is a novel that will arouse many emotions and thoughts in the heart and mind of a reader… and yet, we are not sure of the catharsis!