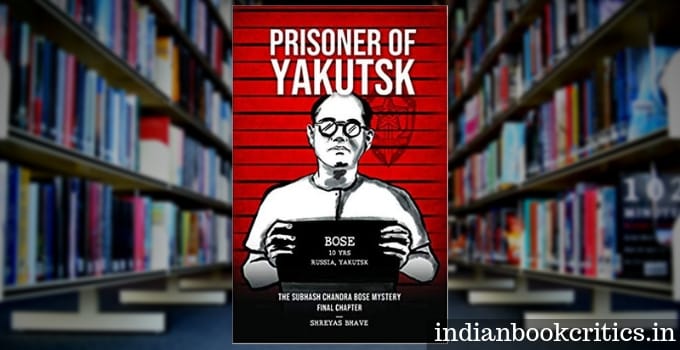 In the ever ongoing saga of Netaji Subhash Chandra Bose’s mysterious death and conspiracy theories around it, creativity has always added something new – sometimes in the form of realistic fiction and sometimes in the form of fiction only. However, it seems, that each and every new addition to the already long list of theories is always interesting as well as very valuable for the common people. This time, after so many attempts in the past by so many authors, Shreyas Bhave has come up with his novel Prisoner of Yakutsk and the novel claims to be the final chapter in the Subhash Chandra Bose mystery. Well, let’s see how interesting is this title as a novel and how valuable is it as a conspiracy solver (or furtherer).

There are two major characters in the novel. Jay and Tanya. However, the novel certainly captures the attention of the readers more by its style of being narrated rather than the characters. It abruptly begins with a chapter titled ‘The End’ and there begins the beginning of moments you just become too curious to read further and know what happens next. Two timelines are open in the novel – one in the secrets of old files on Netaji and second in the present in which Jay and Tanya are making efforts to uncover the secrets from the depth of mysteries.

This book is mainly for the people who know less about the mysteries related to Netaji Subhash Chandra Bose’s sudden disappearance and that eventually was touted as his sudden demise, in a plane crash. The book certainly uncovers the lid from a boiling pot put on a gas stove – it does baffle you with the art of storytelling that makes you believe what you are reading.

For example, when the mention of Martin Bormann occurs, a reader is certainly curious to know whether Netaji was there in Yakutsk or not… whether he was killed by KGB or not…

However, as the book suggests it would be the final chapter on Netaji’s mystery, Prisoner of Yakutsk only raises the bar of curiosity in the readers’ mind. It further deepens the desire to know when and how did Netaji possibly die or how did he escape. It leads you, yes it does, to some of the proofs that you might take as final words or not. However, in that course, the author has very cleverly managed to keep the readers entertained, excited and engaged with his narrative. Shreyas has been successful in keeping the authority over his text and that is certainly a mark of an author who keeps maturing his art with every next work!

For the final words, I would say that as a piece fiction the book has certainly succeeded! It keeps the readers involved with the progress of the novel. The novelist has managed to play the games of timeline, dual-narrative, and plot very well. He has kept the link between past and the present alive and that’s what makes the work even more interesting. It won’t bore the readers as most of the historical-realistic drama novel does. It is meant for modern readers, no doubt!

You can get your copy from Amazon India. The link is below:

Buy the novel from Amazon – click here to buy

The novel offers a clean, exciting and interesting read. It does not discriminate with modern youth when it comes to knowing the hidden secrets related to Netaji and it has kept a very good synchronisation with modern readers… a must-read for the adventure lovers…