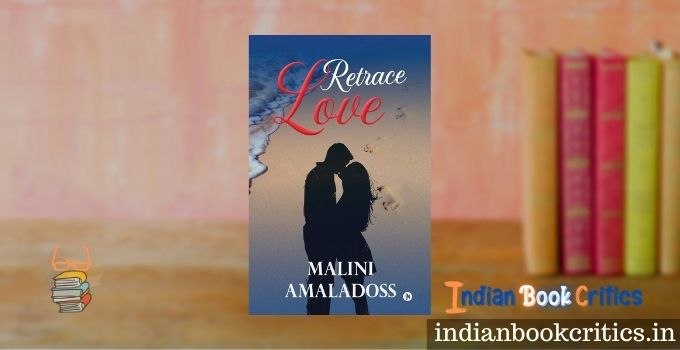 Retrace Love is the debut novel by Malini Amaladoss, a novelist who has tried to offer a new dimension to the idea of love – having loved and lost rather than having never loved at all. Yes, rightly guessed or thought! It’s from In Memoriam by Tennyson and Malini’s novel, if you interpret it in a certain way, almost extrapolates the same idea, albeit in a wider way. Retrace Love is chiefly about love – how one falls in love, how one loves and how does one deal with its after-effects – whether love continues or it surrenders to the circumstances. Meghna, Neil, Tina and Ray are the central characters who dominate the entire novel. All other characters, chiefly, are rather subordinates except the one, Ray’s spouse, who has to play some connect the dots role in this work by Malini. Early impressions were positive and I finished the work within a day because of its emotional compulsion that the work will certainly generate in the readers.

Tina is married to Kartik. However, because her relationship in the past failed with Ray (or so she thinks), she cannot love Kartik. Meghna, who was married to Neil, has separated herself from him because Neil had perverted (she thinks) sexual desires that she could not fulfil. She has a daughter. Ray, who loved Tina, is an important character. Neil, only occurs in nostalgia or Tina or Meghna, is subdued unless the story comes to the present day, towards the climax. The novel is about love – what one thinks and what one sees in love, how once perceives love, how one makes loves (marginally).

Though this is the very debut novel by Malini Amaladoss, an engineer by profession, she has been able to impress me with her writing skill – straightforward, capturing the emotions of her characters, communicating directly to the readers without any hiatus created by complicated writing or expressions.

“I can love neither Kartik nor anyone else even with a fraction of the love and passion I had for Ray. I tried to like Kartik and fulfill my duty as a wife, but I failed.”

Her writing is as simple as the quote above. She has given two of her characters the role to narrate their story and also the novel to the readers. Tina and Meghna – these two tell their side of the story to the readers. Language is contemporary, fitting to the taste of the modern readers and also, the author has been able to manage the multi-layered narrative fairly well. The readers should not have any trouble dealing to read this one to the end. Is it compelling? It depends on how you read it and what kind of a reader you are. That’s a subjective question!

As the title suggests, the novel is about trying to re-trace love. Therefore, the novel mostly keeps the readers in reminiscent of the time. Tina recollects her past, her best friend’s Meghna’s past, her marriage to Kartik and Meghna’s to Neil. How they studied, how they lived with each other, how they experienced their first kisses and so on… there are descriptions of simple episodes and intense episodes. At the centre, nevertheless, there is an urge to settle the human emotions with answers – are we always right? Should we make decisions based on our whims? Should we be too intense with our thoughts? Malini has not made Retrace Love just ‘yet another romantic novel’ with too many bed-scenes and sex on the move. She has been sensible, serious, alert and also expressive. Her characters are designed to represent human follies, the richness of heart and also humane traits. Ray’s character and his wife’s, Neil’s transformation and Kartik’s delusion… there are many things that make this one a better novel, better than many others. I think Retrace Love summarises human reaction to emotional triggers, love, and loneliness very well.

I give it a green and I recommend this novel be read by the readers who can be a little patient and give a literary work the opportunity to flourish, open-up and further. Once you understand the pace at which you need to read this work by Malini Amaladoss, you will certainly admire her art and intelligence with which she could complete her work. At times, there might be some slowly-driven corners but that’s not a big issue! 🙂

You can get a copy of this work in Kindle or paperback format by clicking the link below:

Romantic but with a serious issue… passionate but with reason… a tale that you must read to know what happens when you love and continue to marriage and love but end that relationship because of your intense notions… a very impressive debut by Malini Amaladoss!