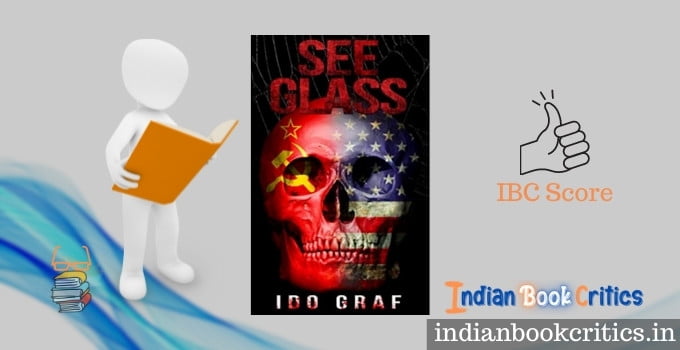 Political crime thrillers are not new. Espionage and spy fiction as well as novels based on grim realities are seldom welcomed in our country with open arms by readers as well as critics. Most of the time, things are set aside because of bias or affiliation of the author with any ideology, party or paradigm. This novel that I will be reviewing, written by Ido Graf, is mainly focused on espionage, secrets buried in the past, governments around the world and intelligence agencies. The author comes from a military and police background and he has travelled across the world, more than average individuals, and that’s why he is a better person to produce a thriller like this. I will focus on a few key elements in the novel, writing style and the ideal audience for this work of fiction. So, let’s dive into the depths of the novel See Glass by Ido Graf.

The novel begins with a casual encounter between a fired journalist (investigative) and a retired sniper of special forces… both ‘family men’ discover their common service areas and try to get along. However, a bombshell is dropped by Adam when he narrates his story to Franck – a story that comprises murders, assassinations, political conspiracies, Nazi-links, intelligence sabotage and so on… in short, a story charged with thriller elements that will keep the readers indulged and excited.

Well, at the outset, let me tell the readers that this is a voluminous novel that might taste the patience levels. However, once you get into the groove, you will be suddenly reminded of the recent as well as past movies based on Tom Clancy’s (and many readers have suggested the same in their testimonials that the author has proudly put on the introduction page on Amazon).

The central character of See Glass is Adam who is a private security operative, former Legion operative, trained sniper and a highly qualified, trained and survival ready person who is given the responsibility to guard a certain character named The Major. The Major’s identity and real credentials are exposed only later in the novel by Adam as well as a letter that he left behind for his granddaughter Rebecca. The story travels around the world – Germany, USA, UK, Canada, Poland, France, Russia and so on… so, readers will have to be ready with an elephant’s memory to keep things in mind, the links alive in their memory and all those possible connections that may help them understand this spy thriller in clarity.

Russia is at the centre of the antagonised forces and we see the Russians as possible forces behind affecting elections and elected democratic governments around the world. The USA intelligence has a mole and the president is also seen with doubts cast about his conduct. Murders of operatives, disowning of the deceased, involvement of the intelligence agencies and all the regular Jason Bourne stuff… on the run, a protagonist and his precious element, in this case, a woman. This is usual for such a novel but too much involvement of the side-track stories and narratives might confuse the readers. This is highly recommended that only those who have read spy thrillers before should read this novel or they might put it aside after the first few chapters.

On the better side in this novel, a reader will notice the details, the minor pictures that the author creates with his words, the class of sentence formation, and the patience with which Ido Graf has described the scenes are more than just noticeable or appreciable. I do applaud such a writing practice in this modern or rather a contemporary era. The author wins my hat here. The plot construction is also good from the outside and I do believe it can be rendered into a nice movie. The motif of the protagonist has been put in the background for a very long time and it keeps the curiosity level of the readers intact. This is a win-win situation for the author!

On the downside or the side that could be better, the grandeur of the novel is certainly deceived by the rapidly changing environment and scene. Places change rapidly and readers will seldom be sure of their line of progress. The author could have kept things a little slow or rather unified so that the progress of the narrative could have been easily traceable by the readers. While a literary style of writing a novel could easily win an author some critical fans, it certainly alienates most of them from most of the contemporary readers who might enjoy spy fiction of repute but not bear a language that has class. It slows down the entire movement of the storyline… the author could have kept it mild so that he could accommodate more readers.

To end this review, I will certainly admit that See Glass is full of thrilling episodes and even its daunting length does not deter a dedicated reader from reaching the final page and seeing the ship descending in the ocean… It might feel clumsy at times but a careful reading will certainly elicit the entertainment and the serious political and military imagination that the novelist has. An appreciable attempt that matches the heights of highly reputable novels one might have read in the past! You can certainly enjoy reading it if you love reading political and espionage thrillers.

You can get a copy from Amazon India in a Kindle format and enjoy reading Ido Graf’s work. Click the link below:

See Glass by Ido Graf is a political, spy and international espionage thriller that will keep you glued if you have a taste of such fiction from the recent past! Well, it’s lengthy and literary in terms of language. So, better be sure you want to read it because you will be forced by the circumstances to get to the end because it’s exciting!