The Chronicle of Golgotha Days – Review 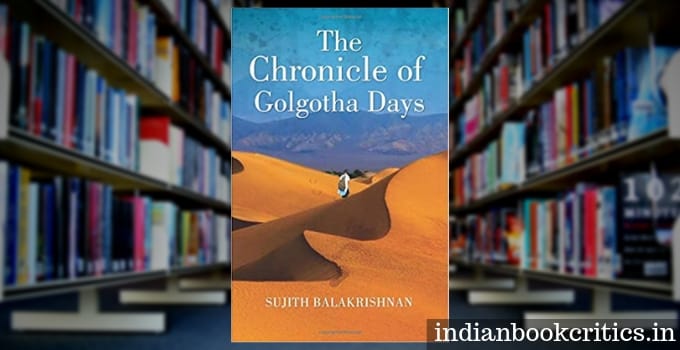 The Chronicle of Golgotha Days by Sujith Balakrishnan is a novel that shakes the readers from inside. It is based on the actual events that took place many years ago in 1996. Sujith Balakrishnan, an author from Kerala, who lives in Dubai has written this novel to highlight the helplessness of Abhaya (a fictional name given to the victim of Suryanelli rape horror) and her family. My name is Amit Mishra and I will be reviewing this novel for Indian Book Critics platform today.

As the title very much suggests, the book is all about a chronicle of the days spent in horror and pain by Abhaya. It is written from her perspective only and that makes the story further connected to the readers as they can easily feel the pain of her. This novel also exposes how great a sham the justice system in India is! People keep on waiting and years keep passing… justice is delayed, delayed and at times denied too.

The novel begins abruptly as Abhaya boards a bus. She takes the readers to her world of wishes and hope. She loves a bus conductor who in turn loves her gold and silver. She decides to elope with her greedy lover, unknown from his intentions. However, she is betrayed and left alone in the world to survive and survival of a young girl away from home and in a distant place among different people constantly looking at her body was impossible! She was lured into the trap and then pushed into prostitution.

The novel powerfully unmasks the perverse mindset of people in power, in the possession and in luxury. Abhaya tells the readers how she was regularly raped by people from different walk of life – politicians, advocates, officers and others. She died many deaths. She died every day! She died within herself because she put her trust in someone in the name of love. Other than exposing the people with a lust for the body, the novel also exposes how people use the purity of the idea of love to grind their axes.

“Without a shred of mercy, Ahmad subjected me to all his awkward sexual fantasies and mental distortions for an hour. I could barely raise a finger in protest against him. I metamorphosed into a lump of skin and bones.”

The language is as lucid as it could be. Though written by a person who is just letting the world know the story, the novel seems more like coming from the victim herself. So, one can safely say that Sujith has succeeded largely in his debut novel The Chronicle of Golgotha Days. Yes, at times it might sound a little monotonous to the readers just reading about a girl being abused sexually and physically and mentally tormented and just that. So, as a novel, the book might trouble the readers because of its limitations. However, within those limitations, the book has been amazingly done! You can grab your copy from Amazon India now:

buy the novel – click here to get a copy from Amazon

The Chronicle of Golgotha Days

A must-read novel for the readers who want to read something more than the usual fiction… a novel that will shake the readers from within!