The Deal in Akmud by Ekta Sinha – Book Review 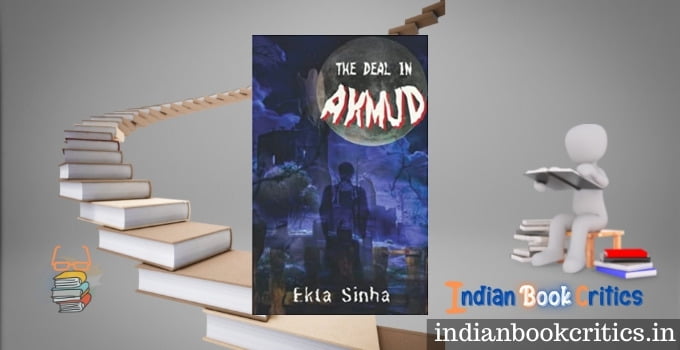 The Deal in AKmud is a thrilling novel by Ekta that is set in an imaginary village in Akmud. The village is different from the others in the territory. It is known for its magical powers and the presence of the devil who rules the village. Surprised? This is the liberty that fiction offers you! Let a village be ruled by evil forces or make it a village full of angels! Akmud rests ignored by many even after sharing its boundaries with three nearby kingdoms. However, something changes the entire scenario. As people cannot ignore this village (only if something unexpected falls in line) because it is the major route used by traders and travellers, the nightmare awaits. Ekta Sinha, the novelist, has been very agile in describing the village and its merits and demerits. The characters are carefully drawn and they all have certain flaws and exceptions. The novel offers a powerful message – nothing comes free; you will have to pay for it, this way or that way. Well, how is the novel? What is the storyline? Is it interesting throughout or not? Who should read it? You will know these things in the review. Keep reading.

The story kicks in Akmud where villagers are living peacefully in the lap of nature with lots of scenery and natural beauties. Here live the two respected citizens, Atticus and Branny, who are responsible for all the major magical incidents in the village. Atticus sells everything and accepts no payment in return with a mystical signboard displayed in his shop. The story of Madus is more than enough to apprise the readers with a glimpse of what may happen once someone picks something from Atticus’ shop.

Things change when Afton, a respected trader who enjoys the patronage of the King, comes to Akmund and that changes everything in the village. Things happen to Afton that he could not expect in natural circumstances and the King agrees to send his men for the investigation of the events that have taken place.

Misunderstanding and mishap happen as the soldiers who come for investigation murder Marcus’ wife and daughter. Marcus is unable to understand anyway to further his angst and vent out his anger against Afton as thinks Afton made all this happen. In frustration, Marcus makes a deal with the devil and vows to kill Afton. However, in a haste, he agrees to the stipulation of the deal that he will not be visible to anyone in his village and people will forget any memory of Marcus. Marcus doesn’t understand the implications of the deal and that’s what the novel suggests – magic is in the life we live. It is not in the things like revenge, magic or the occult.

Marcus does wish for atonement and he wishes to kill the devil with whom he made the deal. However, he knows he cannot defeat the devil alone and luckily, Marcus gets an amulet from an angel named Zona. What happens next? What will happen to Marcus? Will Marcus be able to defeat the devil and get back his life? These are the questions that will be answered as you read the novel to the end.

Theme and the Message:

Ekta Sinha has written her novel with many messages embedded in the storyline. Any reader will be able to get the messages symbolically, metaphorically and apparently as the reading process goes on. Moreover, the theme is a peculiar attempt in Indian English writing as I have not come across novels that deal with black magic, evil forces and the fight between righteousness and devil on such a scale.

Theme and plot are certainly the strength of this novel. However, one cannot say the same about the writing style and language. Ekta’s language does not support the idea of this novel – or, without mincing the words, the standard of the language used in the novel does not meet the expectations that the book’s introduction raises in the mind of a reader. The novelist has tried to do her best and she did as well, we cannot fault her too much for it. However, since it is her first novel, we cannot expect everything to fall in line in the very first attempt. Ekta has done wonderfully in terms of her plot construction and theme management, she has managed to send the messages away to the readers as well. You will like many things except for the language at some points. So, if you are looking to read something magical and new, you can get a copy of The Deal in Akmud by Ekta right now from Amazon India in paperback or Ebook format. Click the link below:

The Deal in Akmud by Ekta Sinha – Book Review

The Deal in Akmud by Ekta Sinha is a novel that will entertain the readers beyond the conventional margins of a fictional book. It brings new things to the world of Indian English literature. You will enjoy it for sure, albeit with some limitations of linguistic prowess.