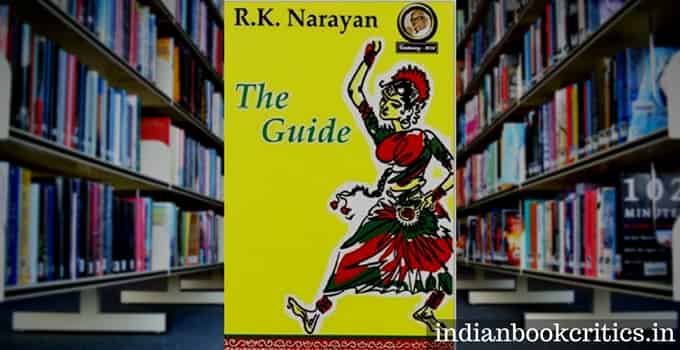 In our love for the desi classics, we have decided to review the books by the authors who are still very popular among the serious readers of India – even after their deaths, long ago or recently. To start, we are presenting the review of the classic Indian romance, matured with philosophy of R. K. Narayan, The Guide. Amit writes this review based on his reading of the book and we at Indian Book Critics hope that you will like what he has to say about The Guide. Let’s have a group reading of it!

The Guide, with a very subtle title to an extraordinary romantic novel, does impress the readers of Indian fiction and the storytelling skills of R. K. Narayan only add further fancy to the novel. It offers animated characters and ‘round ones’ who change as per the situations around them. Raju, Rosie, Marco… everyone changes. The world and atmosphere change. Raju’s mother change. And later, even Nalini changes. It’s about realisation. It’s about perception. It’s about love. It’s about lust. It’s about greed and then, it’s about salvation.

The Guide can be read as a novel which is more abstract in nature than being an on-ground-fiction. Narayan’s story begins in Malgudi, like many others by him, and ends somewhere else. A greedy and mischief tourist guide, known as Railway Raju, is very popular among the tourists who love him because of his animated behaviour and skills at representing the beauty of the city and nearby areas. He knows many languages and he is truly pictured as a fascinating character. To bring the tension, Narayan introduces Rosie and Marco, a married couple who come to visit Malgudi. Marco comes to discover caves and antiques and some civilizational proofs which have been buried deep. Rosie comes to accompany him.

The Guide is also about human nature, women issues and serious satire on marriage for purpose rather than a marriage of people. Rosie is almost ‘bought’ by Marco just because he is wealthy and he needs some ponds of flesh for his sexual desire and Rosie needs a name as her husband because the world isn’t a good place for women like her – who dance and entertain others.

Raju shows admiration for her art and Marco shows disgust as usual – Rosie is drawn towards Raju and Marco leaves her behind himself with Raju only. Raju has to leave his hometown to bring to reality the dreams of Rosie who later becomes Nalini and becomes a very popular dancer. She loves her art and Raju loves the money that her art brings. Later, greed for money brings a rift between Raju and Nalini as well and Raju is sent to jail for forgery, copying the signature of Nalini for ill purposes.

And at the end, things go out of the general purview of the novel. We come through the philosophical side of life and realisation strikes Raju. He becomes a Sadhu and tries to redeem himself of the ‘sins’ that he has committed. Can he do justice to himself? Can he wash his ‘sins’? Will God forgive him?

Critically, The Guide is a complete novel which does not leave the readers in disgust as they are left after seeing the latest Avengers movie – the infinity war. It offers them the situations which are ripe enough and are full – readers can decide what to do. The language is always as beautiful as you will find in the Narayan’s novels. The plot is also thriving and alive and the theme is far more serious than being merely based on a romance of opportunism! You will love this piece of Indian English literature!

Have your copy of the novel from the Amazon link below and do let me know how do you like it.

The Guide by Narayan on Amazon – purchase now

Review by Amit for IBC

Our review – a complete novel, a whole fiction!