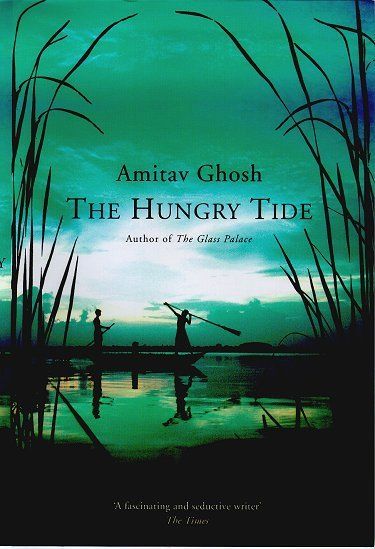 The Hungry Tide by Amitav Ghosh is a very popular novel and mostly included in the university syllabuses across the nation. There are certainly the things about this novel which differentiate it from the most others out there in the market. The writing style and the choice of theme (which is always a class when we talk about Ghosh) are amazing. Who cares for the dying adivasis and who cares for the animals in the forest and who cares to think for those who don’t even know whether they are Indians or Bangladeshis… The Hungry Tide demands our scrutiny. Indian Book Critics will bring it to you.

The novel is somewhat retrospective and finds its base theme in the 1978-79 Morichjhanpi massacre in West Bengal which led thousands of inhabitants of the island to other places. The characters are limited in the novel which makes it a pleasant read. The major ones are – Piyali, Fokir, Kanai and in a past – Kanai’s uncle. The storyline is very straight – Piyali is on a research trip in India and she is finding out more about the dolphins. She meets Fokir and he helps her in the research by taking her to the portions of the ocean which inhabit dolphins. In the meantime, they both are attracted to each-other very forcibly. Though things don’t go as any reader of romantic novels could wish for… this attraction is just a kind of mental attachment which is beyond the bounds of language and status. Exploring many events and braving the tide, stormy rain and fate, Fokir dies – saving Piyali behind his brave and strong arms. This impresses Piyali Roy so much that she decides to remain in India and also helps the young kid and young wife of Fokir. Kanai, though at the beginning posing as the lead male character, is rather subdued in the background. Storywise, the novel is pleasant – unpredictable and unlazy. It flows with the pages and a reader should not feel too much.

A major choice of the researchers for the papers on Ecocriticism, The Hungry Tide tells more graver tales in the subtext of its pages rather than in the plain words. Amitav Ghosh, as his name is, has written this novel keeping in background the gloom which we have called upon ourselves by disturbing the balance and the order in which nature had to be. The scene in which a tiger is burnt alive and those details which narrate how troublesome the life of the island inhabitants become after the police orders are wonderful as well as grave. Most of the serious concerns are unfolded in the novel through the diary of Kanai’s uncle. That diary also unfolds some romantic encounters from the past in a rather sophisticated manner.

The novel, however in an implicit manner, raises questions on the operations of the Bengal government and also the central leadership of that time, the late 80s. These questions are not directly posed as the line goes – conceal the messages which are important and let the world decipher and answer those. Amitav Ghosh has successfully stuck to that principle of writing.

Technically, creating a metamorphosis of seriousness mixed with a narrative which can somehow manage the readers to stick with the book up to 400 pages is not a bad performance. Yes, there are a few concerns which reader can raise while or after reading the novel, but those are minor ones. This novel could not be better than The Hungry Tide is! Indian Book Critics passes the novel with an A grade and suggests that readers must go for it without wasting time in giving a second thought.

The Hungry Tide by Amitav Ghosh

A fantastic novel by Amitav Ghosh! Must read for all those serious readers of Indian fiction!