The Ministry of Utmost Happiness by Arundhati Roy – Book Review 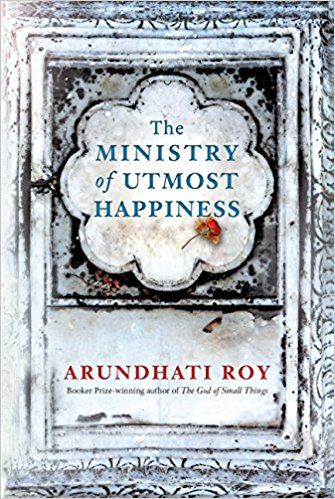 The Ministry of Utmost Happiness is the latest book by controversial Booker Prize winner Arundhati Roy, the so-called peace activist who constantly speaks against the so-called ‘brutality of the Indian State’ in different forums, on international stages and almost everywhere she gets the opportunity, makes an ample use of that. Back to writing fiction almost after 20 years of her first book, The God of Small Things, she has created the sensation once again. Without even knowing the content of her book, The Ministry of Utmost Happiness, people (with ‘different’ inclinations) were crazy about her book. And finally, that the book has been released, people are reading it and offering their opinions. It was the time that we also, the team at Indian Book Critics, took a dig at the book and explored what this is all about. The first line before we start the exact book review – the book offers things for everyone and it’s flexible this time; it will turn the way you want it to turn.

The major lead in the book has been ascribed to a transgender, called Anjum. As suspected, the set-up, at the beginning, of the book has been styled in the backdrop of the India which was in making in the days of her birth after the much-awaited independence for which many of our brave hearts had to lose their lives. As one could already have imagined, the narrative surely takes us to Kashmir. There are deaths, inhumane deaths and numerous instances of brutality, attacks, rapes and what not. The author seems to be taking a moral high ground and taking an ‘objective’ observation of the things which she must have recalled from some contorted books of History produced by people who might have influenced by the lines of Pope – all looks yellow to a jaundiced eye – and might even have tried to do so as well. For those who might have wished to see the ‘ministry of happiness’ won’t find any! There is none.

After a much restrained failed attempt to remain objective, at last, Arundhati Roy opens up and returns to the native – resumes, perhaps from the point where she stopped, her rhetorical attack on the Indian state and once again blazes every arsenal out of her propaganda quiver. And guess what, there are references to almost all the controversial incidents, rather highly controversial ones too. One such is the Godhra arson incident where more than sixty Hindu pilgrims were burnt alive. We get the ‘horrific’ views of Western’s dear author Arundhati Roy and her rhetoric is enough to provoke!

At the end of the day, when the book finishes after so much of tough ‘tolerance’ to consume this highly untasteful pile of pages with personal attacks on the issues of controversy and one-sided dialogues where ego is talking to the alter-ego, a reader can judge the book as a non-fictional propaganda disguised under the camouflage of fiction and attacking the Indian state (really? or a particular community?). He affinity towards Naxalism and terrorism is wide open in the public domain and you will find nothing better than that in her highly biased fiction. Yes, for those who want to enjoy the novel as a work of fiction (that you certainly CANNOT), can go ahead and read those 464 pages and see it for themselves.

Reviews for the book have been pouring in since the first hour it hit the markets and that makes us ask – are these readers so fast? Western Media and literary intelligentsia, as usual, is high on the rhetorics praising the novel as it denounces, as usually any piece of writing by Arundhati does, the Indian state. Some objective reviewers who care to present the truth that is inside the book, have come up with the counter-views as well. Yes, there are, if we force, a few literary qualities in the book. And the best among them, that our team has discovered, is – just keep on saying what you want, but do remember to find a proper and useful ‘semi-fictional’ narrative which doesn’t look like one. Some intellectuals have already tried to find a parallel between Arundhati Roy’s Anjum and some real life lady of the world… Let’s see where does this go now.

Indian Book Critics’ stand about the book The Ministry of Happiness is very clear. We did not find anything happy in the novel by Roy. That ‘ministry’ and ‘happiness’ are cleverly used as unusual puns to suggest the opposite. As a person who does not believe in the democratic set-up, Arundhati Roy is fully justified with her work! Our suggestion to the readers is that the book is not worth the amount it has tagged on the blurb. Use your bucks wisely. Good Night!

The Ministry of Utmost Happiness

The book is a non-fictional verbose in the garb of a semi-fiction work. Read it only if you like what she says in public.