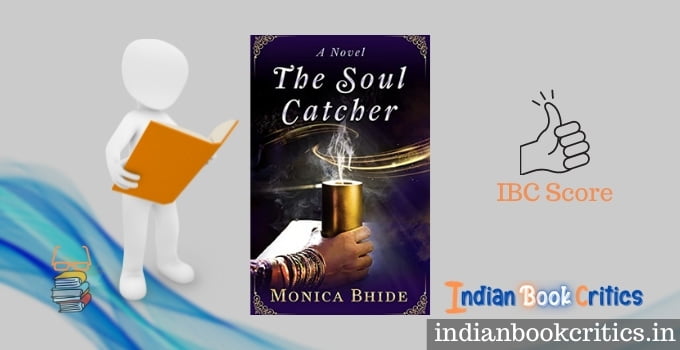 The novel is actually consuming and let me warn you that you might end up thinking a lot. It’s a one-go novel and it will automatically draw you to read it till the end. There will be questions in your mind once you are done with this work. Could this be possible? What if this happens? How the world would be if such a thing happens? The novel is mainly based on a premise that there are a few special people (mostly women) who are gifted with certain powers and one prominent power is to be able to move a soul from one body to another and that is why you see such a title – The Soul Catcher.

Monica’s novel relies heavily on her imagination and one has to admit that her imaginative prowess is quite capable because she could wonderfully imagine a place where people are rather depressed, confused and not so certain about the way things are moving around. The leading protagonist tag can always be labelled on Yamini because it is her with whom the novel begins and then we can name any character in any order and you will not find anything different. Yamini is a soul catcher and she has the power to transport a soul from one body to another. She is described performing the act in the very first episode or rather chapter of the novel and it gives an idea that she feels pain in the process but does it because she wants to help people.

The novel has 13 chapters if we add only the prologue which is important. However, we also have to add the epilogue because that gives a clear idea and a few questions as well. So, you have to read 14 chapters spread in about 150 pages. And as you begin reading, you will notice how wonderfully, tightly and flawlessly the chapters are connected throughout the entire novel. The author has left no room for confusion and you can understand the entire novel, in spite of the work being dark, mysterious and a little metaphorical to follow (comparing it to other publications of recent times).

Yamini begins the story. She ends the story. IN between, the readers will find many characters who appear and disappear accordingly and mostly taking the spotlight in chapters dedicated. The titles of the chapters are metaphorical and serious or regular readers will identify the meanings and ideas easily. However, those who read for entertainment only will also find too many occasions in the novel that will make them appreciate the work. It’s subtle. It’s one of its kind. It’s compelling and it’s also satisfying!

Arguing from a critic’s perspective, the novel’s length could have been prolonged to accommodate the number of characters it has. Otherwise, it looks a little haste that the author has shown in finishing the novel. Though it does not create much discomfort in reading, readers could have appreciated that a little more because it could add more space for the story to open out. It’s tightly moving in harmony and modern readers are not open to such a practice by modern authors… The Soul Catcher demands indulgence from the readers and those who will get in-depth will certainly find out what I mean by adding this section.

However, language is wonderful… the narrative is certainly compelling and always draws the readers into the next chapter. The character development could have been deeper if the novel had more pages. As a whole, the story does appeal and lets the readers get entertained as well as attracts them into a conversation with themselves.

To cut it short and also to put a curtain on this review, I will add that this novel by Monical Bhide will be a benchmark in judging mysterious, secret, magical or even dystopian novels from now on until I find something better and subtler. I liked the metaphorical journey that could accommodate almost anyone… Do read it if you are looking for a change and want to read something interesting as well as sensible and meaningful this weekend!

The Soul Catcher by Monica Bhide is a mystery novel that involves souls, magic and metaphors… a must-read for all those who want to read something subtle and multi-dimensional!