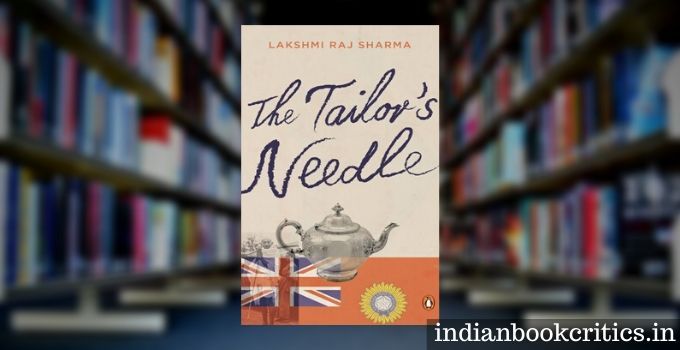 Lakshmi Raj Sharma’s novel, The Tailor’s Needle, is set in the early 20th-century when the freedom movement was gaining momentum. The scent and feel of India prior to Independence compelled me to read this book as soon as my friend recommended me. Being a curious reader, I would never like to miss any book which provides me with an opportunity to travel to the pre-independence time and live the experiences and struggles of that period. And this book has colours of pre-independence India, spices of orthodox Indian tradition and challenges to deal with evil social practices and struggle of people for freedom.

The plot of the novel revolves around Sir Saraswati Chandra Ranbakshi, popularly known as Rai Bahadur, and his three children – temperamental Maneka who considers herself not less than the queen of Britain, Yogendra who aspires to be like his father and Sita, typical stereotyped Indian girl of that time – humble and prideful. Sir Saraswati Chandra, Cambridge educated, is the Prime Minister of a princely state of Kashinagar, but immediately leaves Kashinagar and shifts to Mirzapur after the demise of Neel Mani Singh, the Maharaja of the state and starts a normal life. Though he occasionally goes Kashinagar to help the new Maharaja, Ranbir Singh, whenever he seeks Rai Bahadur’s advice.

The author, who is a literature professor, has explicitly highlighted the caste and status discrimination which was highly prevalent at those times and how a few people would come forward to outdare such practices. In such a typical scenario, how difficult it would have been for Sir Saraswati Chandra to get his son married to a Gauri who belongs from a Vaishya family?

Sir Sarwaswati acts like Tailor’s Needle. One who doesn’t discriminate between people on the basis of caste and religion. With this attitude, he helped poor and lower caste Indians who were tormented by Englishmen during the time of captivation and this is how he contributed during India’s freedom struggle and pronounce Gandhiji’s philosophy that countered untouchability and preached about equality.

Further, Maneka’s husband’s murder mystery intensifies the novel and made it an excellent read. Though Lakshmi Raj Sharma’s Tailor’s Needle matches the interest of the literary class, I will certainly recommend this novel for an excellent story, for the wonderful depiction of events, and for readers who are interested in exploring India prior to independence in 1947.

Sarcasm, looking at the novel technically, plays an important role in this novel. Right from the beginning, a reader can witness this quality. Other than sarcasm, contrasting characters, intertwined twists in the plot, pinching and soothing realism, comforting and unsettling aspects of the storyline… there are many things in the novel that kept me engaged. It is written in a classical and traditional manner. The author has done all he could to match the storyline, events and style with the characters of an India that was still in the dilemma between choosing the Western way of life or keeping up with their civilisational philosophies. I am sure that the readers who take an interest insensible and serious literature will find this novel worthy of the time they invest in reading it.

The readers can get a copy of this novel from Amazon India. Here is the link to the Amazon Kindle store:

The Tailor’s Needle is a novel by L. R. Sharma, an Indian novelist, published in 2012 by Penguin in India (originally published in 2009 in London). This novel takes the readers to India before independence with all its glories and follies. An amusing, sarcastic and realistic account of that time with a set of characters that matches the storyline… unmissable for the lovers of sensible literature!