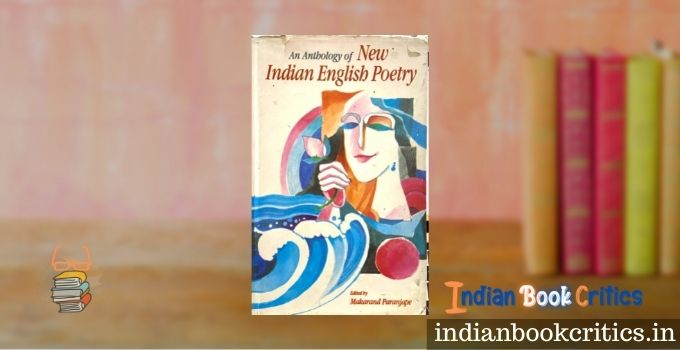 Indian English Poetry has much to offer if you are a curious dealer of words! It has the depth that will soak the imaginations and emotions, thoughts and intellect, ideas and vision… almost anything that relates to the faculty of human consciousness can be traced in Indian English poetry, varying in its offering and content from the time of its evolution to the time present when we have already lost what was once established and looking for new dimensions that could fathom the vivid colours of it. Have you read Indian English poetry enough to have your own response to it? Don’t go by the words anyone writes, including myself, or speaks. You have to feel Indian poetry by your own heart.. and then only you will be able to generate a response that will be deemed authentic, valid and reasonable to yourself. I am writing about a collection of poems by Indian poets, edited by Makarand Paranjape and published by Rupa & Co.

The editor of this supposedly ‘new’ Indian English poetry, Makarand Paranjape has become very much an established name in the world of Indian intellectuals wrestling their intellect in the ring of literature. However, many of the poets that Makarand included in this poetry collection, including himself, are not found very easily accessible outside of the circle of academically compelled individuals. The poets of the bygone era who have already left the world many decades ago or a few decades ago are still very much alive and active in the minds of the common readers who are interested in poetry. Why? The editor might need to explain this to us.

Meanwhile, as you open this book and start reading poems by the poets that Makarand found ‘new’ in 1993, you will find many wonderful lines, many memorable images and many extensively attractive ideas. Charmayne D’Souza finds a few poems of herself included at the top of the piles of pages in this ‘strange’ collection with ‘bedfellows’ decided by the editor in a haste – strange hyphens, even stranger analogies and a few lines to hark – nobody would know, in general, the depth of poetry by D’Souza because her words are in a haste to reach the winters of South Dakota. ‘An elbow in the rib’ remains a hurt!

Ranjit Hoskote strikes with his poems from the maiden collection published in 1991. He has shown remarkable skills at inspiring the readers to create images in his early poems as well. Something remains with the readers, as I experienced, even after closing all the chapters. Moving forward, Rachna Joshi does not impress with her words except for a sad satisfaction that she sketches with her poem Trial by Fire… Suma Josson has been long-forgotten as a poet because she entered into a domain of myth-making. Her poetry, to be frank, ‘settles down into the invisible.’

Tabish Khair seems overpowered by his own ‘streets of poem’ and he is into rekindling his memories, bad and good. Though the images are bald and monotonous, a few vibes remain. Desmond L. Kharmawphlang is over joyous in his wonderland without caring much for the things around him. It’s nice to see a poet in a wonderland unless the reality is too penetrative… yes, ‘and some bangles’ remain reverberating with their sound.

Hoshang Merchant shows the colours of a rebel in his early collected poems in this anthology. Hoshang’s poems are poems that one could call new in that time. However, he did not exhibit all his might in the early days and if you are aware, you must know ‘him’ by now. Prabhanjan K Mishra is too ‘immersed’ into the ‘womb’ of love and he does not have time to look otherwise. Such dedication to a theme and then constantly throwing the bones of metaphors to attract the hounds of muse… she comes after they come. Prabhanjan is alive with his words and you like some of the lines that they form. Vijay Nambisan is vivid. Robin S Ngangom has too much to say about himself and his idle life that lets him make poetry… imagine things and visualise them to make poetry admirable but simple. Bidhu Padhi is close to nature. Summer finds a grand reflection in the collection of his poems in this book. Makarand Paranjape’s poetry is more like personal records hidden between the lines, drawn from his past and served to the present… more like a ‘used book’ but still fresh because it contains the excitements one might have for words… of the unknown.

Tara Patel strikes with her words rather quickly, with the very first line of her poem ‘Woman’. However, the strike quickly softens and readers meet with nature, memories and poetry. The editor could have been easy on R Raj Rao and let him appear with better poems… otherwise, all his poems, are like monologues where the poet tries to console himself of things gone by and things to come. Sometimes interesting, nonetheless. E V Ramakrishnan is a wise record-taker and his poems remind of things and also hint at things present. Still fresh, a few, that you can taste and swallow or just chew and taste. Prosaic most of the time, the poems lack the passion of verse. Sudeep Sen invokes Japan and New York… more than one may expect today. However, in those years, it could have kindled the liking in readers. Long lines, sadness and sorrows, the poetry of the mute… Menka Shivdasani talks about things she feels, thinks and then writes. Her poetry, recorded in the collection, are dialogues with herself, nothing more but nothing less… it’s remarkable how a Candle feels and Amber comes alive. She puts life to the non-living and impresses the readers in patches of strange flashes.

To end, Jeet Thayil sounds promising when he questions himself. An enigma wrapped in problems that no one would like to suffer…

And to cut it all short, Makarand Paranjape introduced to us some of the poets to be in the year 1993. Many of the poets appeared with their poetry collection by the same publisher that published this collection as well. However, the choices of poets and poems could have been better, including the poems by the editor himself. Still, not to forget, the poetry collection has sparks that fly in between the visible silence of the hearth. You could hear it. You could witness it. You could ignore it!

By Ashish for Indian Book Critics

An Anthology of New Indian English Poetry by Makarand Paranjape is a collection of supposedly ‘new’ Indian poetry in English in the 90s. However, the collection suffers wrong choices of poets and even worse choices of their poems.