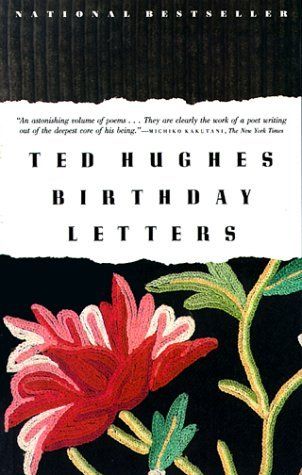 With those rare poets who became more popular than their poetry, Ted Hughes and Sylvia Plath share the stage. More than their poetry, their personal lives still use to be ‘much-talked’ interest in the public domain. No reader who reads Sylvia Plath or Hughes should be ignorant of the suicide, controversy and a torment of marital relationship… While Sylvia told her tale much before through her autobiographical novel, The Bell Jar, Ted Hughes decided to explore the ‘hyper-politicized’ lanes just before his death. He came out with Birthday Letters in 1998. Birthday Letters by Hughes is a collection of eighty-eight poems. However, the 208 pages of the book are not mere the paintings on the walls; this time, Hughes also spoke openly of his relationship, marital life and Sylvia…

The visual appeal of the hardcover Farrar Straus Giroux edition is marvellous! You cannot keep yourself from reading the book as soon as you see it and getting inside, you will be taken into a world through the eyes of Ted Hughes and finally, you will get to read ‘this side of that story’. The edition which I have read comes with a message on the jacket (front one):

“Ted Hughes’s Birthday Letters are addressed, with just two exceptions, to Sylvia Plath, the poet to whom he was married.”

This message from the publisher’s end tell so much to a common reader and anyone would be highly inquisitive about the ‘inside story’ of a marriage which was written about innumerable times in the voluminous books! With the same interest and also of reading some typical poetry with quality by Ted Hughes, I started reading the content. Not more than 6 pages and I came across the lines on the 8th page:

“Ten years after your death
I meet on a page of your journal, as never before.”

Certainly, Hughes has finally spoken out! He goes on with the memories and sorrows and finally realises on page number 9 that:

“You are ten years dead. It is only a story.
Your story. My story.”

Just by reading this far, I got the message. Hughes is not going to shy away from being open in this book which he openly declared as an address to his deceased wife Sylvia Plath! Moving ahead with some extraordinary and some of the ‘just poetic’ letters, we also get to know that Sylvia hated Spain as much as Hughes felt it ‘home’. So, we are surely getting an insider story through these Birthday Letters!

Sylvia’s ‘favourite character in all literature’ was the Wyf of Bath. Hughes discloses this in a poem entitled Chaucer. Blah blah and then loved to count the bears… by the moment I reached to pages nearing 150s, I was home with my thoughts about the merit and the message of this collection. The poetry of Ted Hughes is far greater than these ‘letters’. We rarely see a glimpse of his best poetry in this rather ‘getting out of the box’ collection which does nothing but tries to let us know what Ted thought of Sylvia and how he managed to live after her death (in her memories).

In the light of poetic delight, I do not appreciate this book very much. However, we must not forget that Hughes must have made his mind what he had to do with this collection; at last, he had to break his silence because people kept speculating. And this came to the collection just before his death… Keeping that in mind, one cannot even expect it to be at the height of his poetry because this is all but a personal exercise of words! The readers who would love to know about the unhappy marriage with some flashes of happiness, the life and the psychological ambit of it and some untold stories, please read the book to see all your urges being quenched! Moreover, I must submit that rare are the occasions we get to read the poems which directly come out of the poet’s heart without prejudice, polish and that extra layer of imagination… Hughes has done the same thing here. His poems, might not be at his poetic best, are at his personal best and he is at least being truthful that the poets aren’t often!