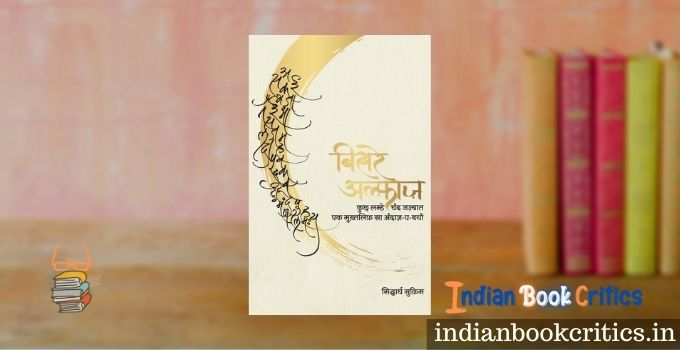 Bisre Alfaz is a book containing poems in Hindi as well as English, written by Sidharth Mukim, a New Delhi based poet. Though the collection has Hindi poems in the majority, the poems that were written in English, few in numbers, exhibit the depth that the poet has in his verse. And that’s why, even being the very debut collection, seemingly a passionate one, Sidharth Mukim’s writing does not fail in making an impression upon the readers – the leisurely readers as well as the readers with the experience of multi-years invested in reading books from different eras and authors.

Most of the poems in this collection are nostalgic in nature and tone. Sidharth seems to remember his childhood days, his relatives, his friends and the days that he has spent in all these years feature in the lines that he writes. There is also a woe that can be felt in some of the poems – a pain that exhibits how the time has changed and how we have shifted from a genuine life to a life that is aided by vanity and inactivity. Sidharth’s thoughts may find a reflection in many of his readers’ mind as well.

Sidharth has also used his colourful romantic imagination to the fullest of its capacity and he picked up the words from his rich Urdu-Hindi lexicon to paint those imaginations, expressions and emotions on pages. There are many poems that are deep in imagination, romantic fancies and apparently charged with emotions that can compel any reader to think what the poet is thinking…

The poems generally express reminiscence of the poet that he might have recollected in his leisure. Most of the poems are loaded with emotions and some of them are also decorated with realism, awareness, wisdom and thoughts that are objective rather than being purely subjective to the poet. Sidharth’s collection of poems seems the one written out of passion and desire to create something rather than the need to portray one’s art on the canvas. Sidharth is an emotional poet, not a professional poet and he has shown the same in this collection scented with his nostalgia. He remembers the days with his friends, his relatives, his beloved… he does it without any qualms and that boldness is commendable!

At the end of the things, any reader can notice that Bisre Alfaz is truly about the emotions and thoughts, events and episodes that are largely forgotten by the poet. He tries to recollect all his memories and beauty of the life spent in his words and for himself, he has succeeded. For others, they can try to find out their share of this nostalgic creativity after reading the work. For example, after reading a poem titled Ma, fir wapas aa jao na, in Hindi, anyone can be nostalgic and remember the childhood spent with one’s mother. Occasionally, the poet has also turned to Gods and Goddesses, myth and history, Indian glory for inspirations and the poems about Godly beings have been rich, in terms of lexicon, and the words that Sidharth has used may surprise the readers. It is evident that the poet reads a lot.

To conclude the review, I will leave the readers with one suggestion that they can read this collection with one thought – read, enjoy, read the next one you enjoy and continue until you read the works by Sidharth. It does not need to synchronise with your thoughts in exact details. It is difficult to critique the poems in this poetry collection on poetic merits. Sidharth is not a professional poet and neither does he try to communicate that to the readers. His poems are mostly emotive and he simply writes what he thinks or feels. For Sidharth, apparently, poetry is a raw process of putting your emotions into words… one a page! And he has done exactly that! The poet’s words will be helpful…

All the best, dear readers! And yes, the collection is also decorated with wonderful images that will make the experience of reading poetry better for many readers.

Collection of thoughts, nostalgic memories and verse that will connect with the readers who want to enjoy their memories…