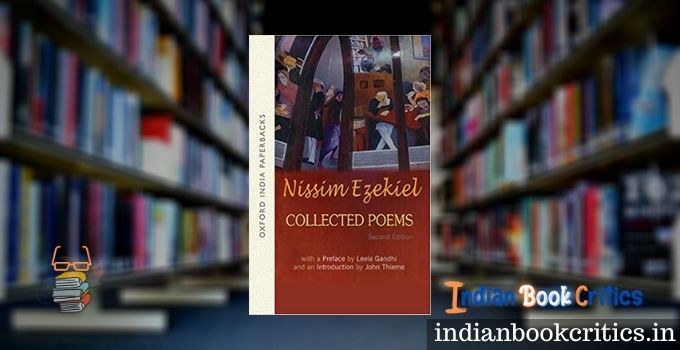 If we assume Indian English poetry as the Formula 1, there is no one other than Nissim Ezekiel who can claim for the pole position for any race that happened after 1960 on any lap – theme, ideas, lyrics, depth, vision, realism, Indianness… though Twitter may mark this claim as disputed and Jack, the arrogant founder of the company, will be first time supported by me. In Literature, no claim can be said to be final, conclusive enough and the ONE. There is always a scope for arguments. However, then, there is something called a collective consciousness of those who understand things. Ask any critic, ardent reader of Indian English poetry, professor or research scholars who have worked on Indian English poetry. I am sure they will raise their hands for Nissim Ezekiel and you may get many interesting reasons why he deserves this respect, pole position and wide appreciation.

This is an article that will also be deemed as an attempted book review of Ezekiel’s emphatic collection of poems, Collected Poems: Nissim Ezekiel, published by Oxford India Paperbacks in 2005 with an introduction and a preface. Ezekiel, I can say after the very first glance, had a special ability that must have been automatically switched on when he sat to write (on many occasions). He could say too much by writing too little – something that all the ‘great poets’ have often enjoyed.

And this one line can tell the entire story which might not be said by very lengthy novels even in many instalments. Poetry and poets have been favoured by the brilliance of the readers as well. They can often understand the hidden meanings, the sub-and-un conscious… Ezekiel has achieved something brilliant in the very first line of his poem printed on the 117th page of the Oxford collection of his poems. The poem goes on mourning the city life, dried river, inability of the city population to observe the morning and the evening skies… in 1959…

Moving forward, I reached another interesting offering in the book – Poems written in 1974, beginning from page number 169. This needs to be mentioned because this section contains very short poems with powerful narratives and sentimental themes. ‘Sentimental’… this is something that might, very often, accompany the cluster of words whenever a person will write something about the collections by Nissim Ezekiel. He writes:

Well, the collection also contains one of the most celebrated poems in the history of Indian English writing that goes by the title Night of the Scorpion and another one, by the title, Philosophy. Ezekiel was blessed with a mind that could learn very quickly, master what it learnt, and then he was instantly able to translate his experiences, learnings and knowledge into wonderful verse, mostly telling a story. Ezekiel is respected because he had earned this respect from his readers, the critics and lovers of Indian poetry for his offerings in verse that were more than pleasant, more than philosophical, more than emotional and somewhere, in the depths, very much Indian – something that the readers could read and connect.

Nissim Ezekiel’s poetry is diverse, serious and poetic even if it sounds prosaic and monotonous on many occasions if you read carefully and care too much to find music in it, music that you can feel. However, at the same time, a reader can also feel a rise in the poetic sensibilities that Nissim Ezekiel conveys to his readers. For that, remember, you will have to read the book as if you are a reading a novel or a non-fiction title that cannot be read in pieces or fragments from here and there. Ezekiel’s poetry is remarkable if your mind and heart get along with it. However, for those who cannot connect with ‘old and ancient’ thoughts and unorthodox imaginations of Ezekiel, the collection might not yield too much reading pleasure!

The journey from the body,

“By thrust of lust
When all that burns in breasts or lips is sated.”
pp. 82 from the book: Delighted by Love, Early Poems 1945-8

“For the present, this is enough,
that I am free
to be the Self in me,
which is not Somebody –
not, at any rate,
the mortal me,
but the Eye of the eye
that is trying to see.”
pp. 206 from the book: Tribute to the Upnishads, Hymns in Darkness (1976)

I am not the perfect or the ideal candidate to rate the book in terms of star and points. However, I will be compelled to put it at anything that is more than 4 and something that is below 5: and the message must be that Ezekiel’s collection, mark it – not his poetry, as published by Oxford, is not perfect but its more than enough to let the lovers of Indian English literature relish glimpses of a poetic genius. So, if you are someone who wants to enjoy a few hours of wonderful poetry in English, this Ezekiel’s collection published by Oxford is for you… get a paperback copy from Amazon India and enjoy!

Buy the book – click here to buy this title