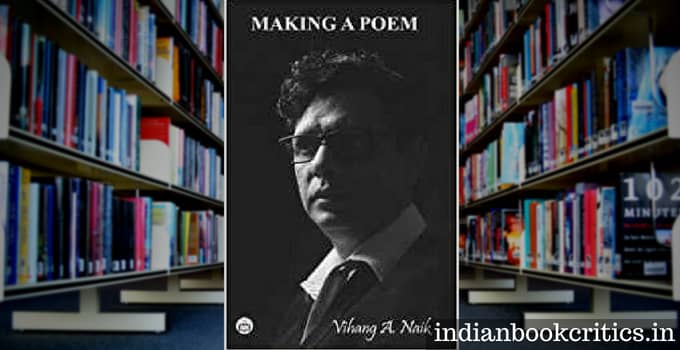 Quick Review – how to make a delicious poem? Vihang knows that perfectly! A nice and animated collection of poems which makes, once again, poetry appealing to the masses… a must read and must admire collection by one of the respected poets of the modern Indian English poetry fraternity.

What have you been reading these days, friends? I was busy in reading the book by Vihang Naik, a collection of poems which has been published long ago but recently got republished and I got an opportunity to buy the book and have my read recorded in the form of a book review… believe me, reading the poems by Vihang was a very satisfying experience because he writes about what he writes and also he writes on how he writes!

“In metropolis
a poet

ends up
with a pen
a blotted
image

Such is the talisman of the poet! Vihang Naik, a popular and honoured poet from Gujarat, has been writing poetry for decades now and his poems have graced many national and international collection till now. Making a Poem is the collection which mostly contains short poems by the poet and all of them, yes, all of them, make a manifold of meanings – to anyone who reads the poems in this poetry collection, the poems talk too much!

“In a South Indian restaurant
I resolved to be a poet for her.”

Things look romantic if you read two beginning lines of his poem, The End of An Affair. However, when you move ahead and read the two next lines, you find something which complicates the who scenario and you are left with too many questions:

“She became a gazal in return.
First silence is poetry than words.”

Vihang has the animation which he emits from his poetic pen. He writes about the beauty of humankind and also the ugly episodes of human life. For him, poetry comes naturally and he just muses whatever he wants. Making a Poem, as a collection, shows us what a poet can be.

There are 25 poems (all short) in the collection by Vihang and he has divided them into five sections, each titled differently and having five poems. You may also think about the classification and naming of those. Dedicated to his teachers at MSU, Baroda, Vihang’s poems begin taking the readers on a journey to the mysterious lands of poetry where nothing makes sense and everything looks sane at once.

Coming to the practical aspect of his poems, let me admit that Vihang’s poems are not everybody’s cup of tea as he is a senior poet, though being contemporary. His poems are like the myriad, the monstrous giants ‘so far so good’ fitted into the tiny stuffed toys for kids. In very few lines, he often says a lot. Even the poems which seem completely bizarre make most of the sense when you read them twice or thrice – you are blown away!

Making a Poem is a collection which you must read – if you are a regular poetry reader – even if you are just a beginner seemingly liking poems, you have to read his collection. Unmissable and unthinkable at times – the poet puts it perfectly:

“You may muse
and play your part,
whatever it be.

Poet, philosopher
or a fool. Doesn’t make
much difference.”

Love it? Want to have a read? Get Vihang’s Making a Poem from Amazon India:

(link will open in a new tab)

A must-read collection of poems… poems are short but say a lot! Have a read and you will understand.